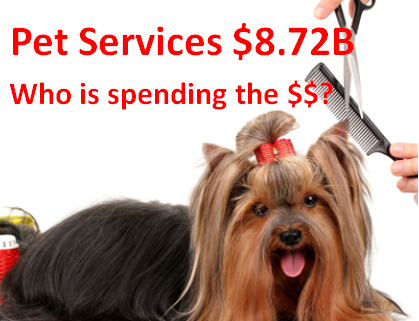 Next, we will look at Pet Services. They are by far the smallest Segment at $8.72B but in 2018, they made the most “noise”. Spending increased $1.95B (+28.9%). This was by far the biggest increase in history. The number of outlets offering Services has been strongly increasing in recent years as brick ‘n mortar retailers look for a way to combat the growing influence of online outlets. After all, you can certainly buy products, but you can’t get your dog groomed on the Internet. This created a highly price competitive market for Pet Services. In 2017 there was a slight increase in visit frequency, but Pet Parents just paid less. This resulted in a 1.0% decrease in Services spending. In 2018 consumer behavior changed as a significant number decided to take advantage of the increased availability and convenience of Pet Services and spending literally took off.

To better appreciate the significance of this huge spending lift, let’s put it into historical perspective. The $1.95B increase in Pet Services spending was larger than the total annual spending for the segment for every year prior to 1999. It was also more than twice as big as the previous largest increase of $0.82B in 2012. This is great news as Pet Services now has a stronger “presence” at the Pet Industry “table” and Pet Spending becomes a little more balanced. Let’s look a little deeper into the demographics.

Let’s start by identifying the groups most responsible for the bulk of Services spending in 2018 and the $1.95B increase. The first chart details the biggest Pet Services spenders for each of 10 demographic categories. It shows their share of CU’s, share of Services spending and their spending performance (Share of spending/share of CU’s). The differences from the products segments are immediately apparent. In order to better target the bulk of the spending we had to alter the groups in three categories – income, education and area. The performance level should also be noted as 7 of 10 groups have a performance level above 120%. This compares to 6 for Total Pet, Veterinary and Supplies but only 4 for Food. These big spenders are performing well but it also indicates that there is a large disparity between the best and worst performing segments. Income is absolutely the biggest factor in Services Spending. The categories are presented in the order that reflects their share of Total Pet Spending which highlights the differences of the 7 matching groups.

We changed 3 of the groups for Services – Income, Education and Area, to better target the biggest spenders. Income is even more important to Services spending than it is to Veterinary, where we only changed Income. The performance levels in Services spending in categories related to income – Income, # Earners, Occupation and Education, are markedly higher than Veterinary which shows an even  bigger spending disparity between the segments in Services.

Most of the best and worst performers are not a surprise. However, there are 8 that are different from 2017, the most of any segment – 4 of the best and 4 of the worst. Also, half the changes were in 2 categories – Age & Generation. The 4 new winners, Gen X, 35>44, Center City and Married, Oldest Child < 6, do reflect the very definite “youth movement” behind the big 2018 lift in Services Spending. Changes from 2017 are “boxed”. We should note:

In Pet Services spending performance, we see 2 major factors – income, which is not a surprise in this most discretionary segment and youth, which is a surprise in a segment that has skewed older.

Pet Services Spending was up $1.95B, the biggest lift in history. In this chart you see the strong demographic impact as 9 of 12 categories had an individual segment that accounted for at least 47% of the increase. At the same time, the drops were small. The largest was only $0.17B. In fact, 6 of 12 categories had no segments that spent less. There were 7 repeats, 4 winners and 3 losers from 2017 but only 5 of 24 segments switched their position from first to last or vice versa, the same as Supplies. All of this indicates little turmoil, just strong, widespread growth. Here are the specifics:

We’ve now seen the winners and losers in terms of increase and decrease in Services Spending $ for 12 Demographic Categories. 2018 was a fabulous year. In 6 categories all segments spent more. Moreover, the winning increase in each category averaged +$1.04B up from +$0.25B in 2017, while the biggest decreases averaged -$0.02B up from -$0.27B.  That certainly shows a widespread lift . The major trend was definitely to the younger groups. Income reasserted its importance, certainly in terms of the number of Earners. Singles definitely stepped up and we also saw a spending move back to more populated areas. The $1.95B increase was the biggest in history and we have detailed the winners in performance and $. However, there were many who performed well but didn’t win an award. They deserve…. 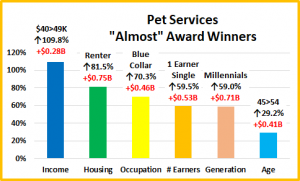 It wasn’t all higher incomes, the $40>49K group more than doubled their Services Spending. With +$.75B, Renters definitely contributed. The Blue Collar workers rolled back their Food Spending in 2018 but increased Services $ by 70%. The 2017 winner for biggest increase, 1 Earner, 2+ CU actually did better in 2018. Gen X won the awards, but the Millennials weren’t far behind. The 45>54 yr olds are mostly Gen Xers and they did their part, finishing 2nd in Age Groups. The spending increase was widespread. In fact, only 8 of 92 demographic segments less on Pet Services in 2018. That means 84 (91.3%) spent more.

The Services segment has usually been “above” changes in other segments. Since 2010 prices have steadily increased but so did Spending …until 2017. An increase in outlets offering Services created a much more competitive environment. While prices didn’t deflate, inflation slowed significantly, and “deals” abounded as Retailers began a pitched battle for Consumers’ Services $. The net result was turmoil and a 1% decrease in spending. In 2018, the abundance of outlets and competitive prices finally had their intended impact. Many more consumers took advantage of the convenience of Pet Services and spending literally took off.

Pet Services are definitely needed by some groups. However, for most demographics, Services are a convenience and spending is very discretionary in nature. The result of this is that CU income is of paramount importance to increased Services spending. This impacts many demographic categories and we adjusted the big spender groups in 2 categories specifically to accommodate this difference in behavior and to better target where most of the $ are coming from. Just how important is income? 40.3% of CU’s have an income over $70K and account for 72.3% of Services Spending. This is a performance rating of 179.4% – the highest rating earned by any group in any category in any industry segment.

Performance is an important measurement. We identified 7 categories with high performing big groups. There were 6 for Veterinary and Supplies but only 4 for Food. This indicates greater demographic disparity in Services Spending.

3 of these groups are directly related to income – Education, Occupation and Income. However, for 2 – Race/Ethnicity and Age, the consumer has no control over their inclusion. They can’t control their age, but it turns out that age was the single biggest factor in Pet Services spending in 2018. The biggest spending group changed from 45>74 to 35>64. However, it wasn’t just the added Gen Xers. The Millennials also stepped up.

Although the lift was widespread, as 91% of all demographic segments spent more on Services, there was a big disparity in the amount spent. This is apparent as 10 of the 12 best performing segments also had the biggest $ increase and the average increase was $1B, up from $0.25B in 2017.

The Youth movement was apparent in the improved performance of segments which reflect their demographics:

… to name a few. In 2018, the Gen Xers and Millennials stepped up and took a position of prominence in Services Spending and raised the visibility of the Services Segment.

At Last – The “Ultimate” Pet Services Spending Consumer Unit consists of 3 people – a married couple, with 1 child under 6. They are White, but not of Hispanic origin. At least one of them has an advanced College Degree. They are 35 to 44 years old and both of them work, in managerial positions. They’re doing well with an income over $200K. They live in the Center City of a metropolitan area of over 2.5 million in the Western U.S. and are still paying off their mortgage.