The U.S. Pet Industry had a good year in 2015. Spending reached $67.75B, up $3.43B (5.3%). However, as we have learned, the industry truly is a “sum” of its integral segments. Each segment has very specific and often very different buying behavior from the many consumer demographic groups. For this reason, we’re going to analyze each of the segments first. This will put the final analysis of Total Pet Spending into better perspective. Note: The numbers in this report come from or are calculated by using data from the current and past US BLS Consumer Expenditure Surveys. In 2015, this was gathered by the U.S. Census Bureau from over 40,000 interviews and spending diaries. The final data was then compiled and published by the US BLS.

By the way, if 65% of U.S. H/H’s are pet parents then their annual Pet Food Spending is $353.94. Let’s look at the recent history of Pet Food Spending. This “rolling” chart provides a good overview. 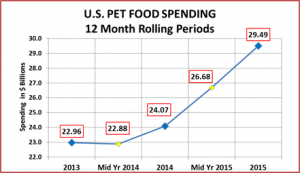 Pet Food Spending dipped in the first half of 2014. This corresponds to the final days of a yearlong deflationary period in this segment. During deflation, in a “need” category like Food, you don’t buy more, you just spend less. When prices increased slightly in Mid-2014, Spending turned upward. However, stable or slightly increasing prices are not enough to explain the spectacular growth in 2015.

An initial clue is provided in the H/H spending numbers provided by the US BLS. The increase in H/H’s is pretty normal. The increased frequency of purchases seems relatively small but the increase in spending is huge. There is no getting around it. You also need to remember that these are national numbers. There was no huge gain in the number of Pets or Pet Owning Households, so these changes in frequency and spending numbers are likely to be the result of significant changes in the Pet Food purchasing behavior by specific demographic segments. First, let’s consider what might generate this radical increase in spending.

As an industry participant and observer for 27+ years and an adult consumer for 50 years, I can’t help but notice the “Pet” happenings around me – in the retail marketplace – in the media – in friend’s homes. Another venue to view what is happening in “Pet” is at an industry trade show – GPE & SuperZoo. The exhibitors and their product offerings generally reflect the current retail marketplace and in fact, can be harbingers of the future.

Between 2015 and 2014, the combined exhibitors at GPE & SuperZoo increased 5.9%. Here are some changes in the product category “numbers” during that time frame which are relevant to the Food Segment:

It appears that the increase in H/H spending on Pet Food came mainly as a result of:

The “What” behind the spending increase would seem to require

Let’s look at some Food Spending Demographics to see if we can locate the “Who” behind the big increase.

First, here is the Pet Food Spending by Income Group.

Actually, there was an increase in per H/H Food spending in every income group. The only Total Food spending decrease came as a result of reduced number of H/H’s in the $70>$99K group.

There is obviously a lot more disparity in the spending by age groups than in the income groups.

The chart below has some other key demographic “movers” in 2015 Pet Food Spending. Take a look! These should help to paint a much clearer picture of the “who” behind the $5.4B increase.

There is no doubt that older Americans drove this big increase, especially 55>74 year olds. They are married couples alone or with one child over 18 still at home. They live in a suburban environment in their own home, which they just paid off. Either both of them work as managers, professionals or in their own business….or no one works…the joy of retirement. It is really the same educated group, just in 2 different life stages.

On the flip side, the drop in spending affects 1/3 of U.S. Households. Much of the decline is coming from what used to be considered the “traditional” American Family – A Married Couple, 25 to 44 years of age. Only one of them works because the other needs to stay home to take care of their 2 young kids. This makes spending pretty tight so they always look for a good price.

While the “journey” has been complicated, the conclusion seems to be rather simple. The big increase in Food Spending was driven by the “Baby Boomers.” They upgraded the quality of their Pet Food and treats and began using the new medicinal supplements available in Treat form. Note: They have been the leaders in Veterinary Spending so they would recognize the “value” in these decisions. This still leaves us with an unanswered question…

How much will the huge increase in food spending affect the spending in other segments?

The Total U.S. Retail Market in 2015 reached $5.3 Trillion dollars – up $119B (+2.3%). The Market was significantly slowed by a precipitous drop in Gasoline prices resulting in a -$103B decline in revenue. For this report we will concentrate on the “Relevant Retail” Total – removing Restaurants, Auto and Gas Stations. This still leaves us with $3.2 Trillion to “divvy up”.

In a recent report we reviewed the 2015 sales performance of the Top 100 U.S. Retailers. That covered the “Headliners” but everyone can’t be a headliner. How are specific Retail Channels performing? We’ll start with a market overview and then work our way down.    (Base Data is from the U.S. Census Bureau Retail Trade Report)

First, Please Take Note: As you are reviewing this detailed data and wondering exactly how does all this relate to Pet Products sales, consider these 2 facts from the 2012 U.S. Economic Census:

To put this year into perspective, let’s look at the overall performance in recent years. 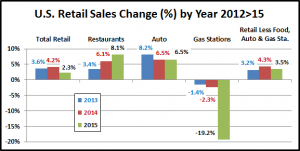 Gas prices had a huge impact on the overall market. The Auto and Restaurant segments have maintained strong growth rates. In fact restaurant sales growth is accelerating. In our “Relevant Retail” Segment, growth has slowed by 19% to 3.5%. This is also significantly below the 4.8% growth rate of the Top 100 Retailers. As we look at the individual channels, the 3.5% growth rate will serve as a benchmark. – Above 3.5%, a channel is gaining market share; Below 3.5%, they are losing share. 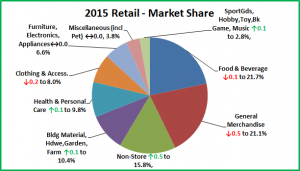 These are large slices of the U.S. Relevant Retail pie. Three divisions – General Merchandise Stores, Food and Beverage and Non-Store account for 58.6% of the total. If you look back at our post on the channel migration of Pet Products Sales, you will see that in the 2012 these three divisions produced 59.7% of total Pet Products sales. Consumers spend a lot of money in Pet Specialty Stores but Pet Products are also “on their shopping list” in the outlets where they spend most of their money.

Because they are so huge, major Divisions of the market generally don’t show much movement in market share in just one year so the changes in the General Merchandise Stores and Non-Store “Divisions” are very significant. Each of the major divisions includes a number of subsegments. For example, General Merchandise includes Traditional Department Stores, Discount Department Stores, Supercenters and Clubs as well as $ and Value Stores. These specific retail channels can have greater movement in share because this is the level that the consumer “views” when making their initial shopping choice. Change at this level is where any ongoing consumer migration first becomes apparent.

Enough “overview”! Let’s look at the 2015 performance of some of the specifically “Pet Relevant” Channels to see which are doing the best…and worst in gaining consumer spending. Eleven of the twelve made the list by generating at least 1% of the Total Pet Products (food & supplies) spending in the last Economic Census. Traditional Department Stores are also included although they have never embraced Pet Products. They have long been a fixture in the U.S. Retail Marketplace. Their slow fade, as the consumers migrated to outlets which better fit their needs, has profoundly affected U.S. shopping as generally they were the “anchor” stores for the Shopping Malls across America.

We will use 2 separate graphs to illustrate the situation in these Pet Relevant Channels. The first will show the % change in sales in 2015 vs 2014. The next will “show us the money” by translating the % into $ gained or lost.

Remember, you must be up at least 3.5% or you’re losing market share!

The leader comes as no surprise. However, there are some huge channels that are losing ground. Now, I’ll “show you the money!” For your reference, the Total increase for the “Relevant Retail” Market was $108B and you must be up 3.5% PLUS $3.2B to gain just 0.1%! 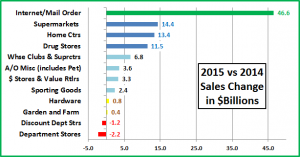 The growth in the Internet/Mail Order is even more pronounced when you look at the change in $ spent!

Look for: (% of Total Business from Pet Products for stores that stock Pet – 2012 Economic Census)

The chart below puts the Market Share of each of these segments for 2015 & 2014 in a visual format so that it is easier to appreciate the relative sizes. Growth in share is indicated by a green box, a decline is boxed in red.

Pet Stores are still #1 for Pet Products. In the Overall Market, there are 3 Olympic Medalists. There is no change for the Gold. Supermarkets remain the largest Retail Channel. However, the race for the Silver is heating up. SuperCenters & Club Stores are growing….but losing Market Share. The Internet/Mailorder segment is growing even faster than anticipated. Gaining 1.1% in Market Share in a $3T annual market in 1 year is definitely fast. In an upcoming report we’ll revisit and update this race between these three…which right now is focused on the Silver. However, you have to wonder what will happen when the internet turns its attention to grocery items.

Overall, 2015 was somewhat disappointing. The $ales increase was 19% less than in 2014 and without the incredible increase by the Internet/Mail Order Channel, there was little excitement or growth. There were a couple of good small points that relate to the Pet Industry – the continued growth of the $/Value Stores and the better than average increase in the A/O Miscellaneous Channel. (Pet Stores included).

Bottom Line: The U.S. Retail Market is growing and evolving as the consumer migrates to the channels which best fulfill their current wants and needs. Today, the “Channel of Choice” seems to be Internet/Mail Order and the movement is accelerating. As always, to survive and prosper, you must identify consumer needs and adapt. 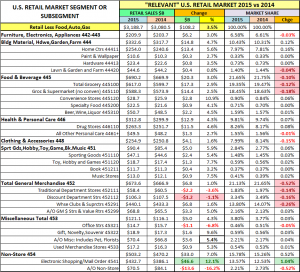