In June, the volatility in the Pet Market segments appeared to be calming down. All segments had moved up slightly for 2 consecutive months. This was expected for the Service Segments but represented a welcome change for Supplies and Food and put Total Pet back on Plus(+) side for the year.

In July we usually expect the Service Segment Prices to flattened out and prices to fall in Food and Supplies. The amount of this drop was critical. If it was less than last year, then the likely decline in Food prices for the year would be mitigated…and Supply Prices may actually turn positive…moving away from deflation.

Then in July the Food Prices went “off a cliff” with the biggest single monthly drop since they began keeping records in 1997 – down -1.95%. This also generated a record monthly drop in the Total Pet Industry of -0.64%. 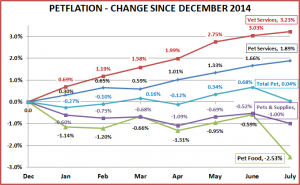 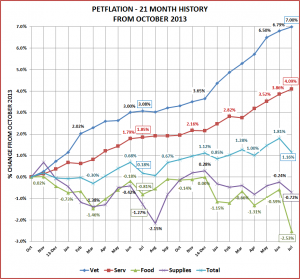 July generally brings price decreases in food and supplies. However, the severity of the drop in Food was unprecedented. Overall we are about 1.0% above the pricing of July 2014. Food is the only segment with prices lower than a year ago. But…it is the largest segment, so it is a major “driver” in the total market.

Now, let’s take a slightly different look at the data. The chart below includes a comparison of the 2015 YTD CPI to the 2014 annual CPI and also includes an updated projection of the annual CPI change for 2015. August or September could produce another drop but if we get the normal Fall increase…. 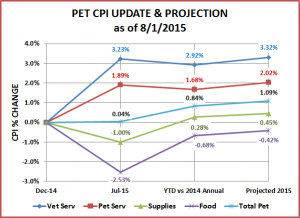 Pet Food – This largest segment is the headline news. July produced the biggest single month price drop in history…-1.95%. Along with the -1.17% drop in January, prices are now down -2.53% for the year. Fall generally produces monthly increases in Pet Food prices but it seems unlikely that they can recover completely…plus December often brings a drop. Therefore, 2015 is projected to be the second consecutive year of falling food prices…down 0.42%. The competitive pressure is getting intense as today’s consumer actively searches for value.

Let’s put this price change in “historical” perspective. For most years since 1997 Food Prices have risen 1-3% annually. In 2007, a series of Pet Food recalls began. From June of 2007 to July of 2009 Pet Food prices rose 23%…yes, 23% in 25 months. It seems that the retail product mix and/or product make up was substantially changed during this time.

There were also other factors coming into play, as the U.S. was in the heart of the biggest recession since the “Great Depression” in the 1930’s. In Mid-2009 prices turned downward and the annual Pet Food CPI dropped -0.4% in 2010. The next 3 years saw moderate increases of 2%. Then in December of 2013 Food prices started down again and have not recovered. The current prices are roughly equal to those in the summer of 2012 – 3 years ago.

The recent recession is widely regarded as a “turning point” in the behavior of the U.S. consumer, with value becoming THE major factor in their purchase decisions. This invariably produces competitive pricing pressure which we are seeing in this major Pet Industry segment. Unlike other segments, “buying” Pet Food is not discretionary. It’s a necessity. Therefore, most consumers are going to be greatly influenced by retail price.

Pets and Pet Supplies –  Since I first began writing about Petflation, the lead story has invariably been the “deflation” of Supplies due to increased commoditization of product categories. With July’s price drop only being one half of last year’s, it seems increasingly probable that supply prices will increase this year for the first time since 2011 and only the second time since the recession…Up 0.45%.

It’s not a sure thing. We should see another price drop in either August or September and possibly one in December. The results in December may be critical for a positive year…then we need to string a few positive years in a row…which hasn’t happened since the recession in 2009.

NonVet Services – July’s price jump was a bit of a surprise. Increases in this segment have been moderating. We now expect prices to increase 2.02%, which is slightly below 2014 and significantly below other recent years. There is an indication from the Consumer Expenditure survey that the years of large increases have started to slow real growth in this segment, specifically limiting it to households with an income of over $120K.

Veterinary Services – The Veterinary Petflation rate is on track for another year over 3%…Up 3.32%. The continued high inflation rate has substantially reduced the rate of increase in the amount of Veterinary services and limited the growth to households over $120K in income. Households under $50K were actually showing a substantial decrease in spending according to the U.S. Consumer Expenditure survey.

Total Pet Market – Driven by Food and Supplies, July produced the biggest single month price drop since 1997. However, the projection for 2015 is still Up 1.09%. This looks pretty good…on the surface. However, when you look beneath, it is being generated by 2 big negative, but opposite situations in Veterinary and Pet Food. Supplies and Services seem to be “coming around” to more acceptable levels but we need the other two to respond for a healthy Pet Industry

This last chart should help put the recent, relative performance of each segment into perspective: 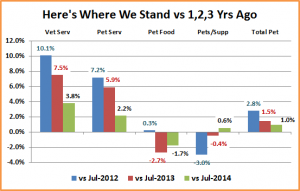 You can readily see the reduced inflation rate for Services and the turnaround for Supplies. You can also see where the big problems lie…in accelerating inflation in the Veterinary side and the substantial deflation in the Pet Food Segment. We’ll keep you up to date in the critical last months of 2015. 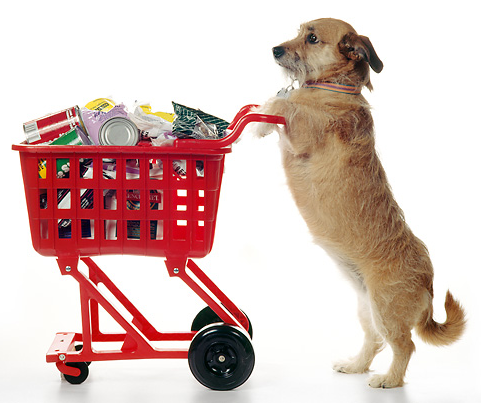 The U.S. Retail market is impressive to say the least. In 2014, the total retail sales were over $5 Trillion. This total comes from retailers of every size and type – from Super Centers to individually owned pet shops. Yes, it also includes online retailers. You don’t have to have a “brick ‘n mortar” store to be a retailer in today’s world.

In this post we will try to narrow the focus to the top 100 Retailers in the U.S. Market. These 100 companies account for 1/3 of the total retail market! How did they perform in 2014 vs 2013…and of course, which ones sell Pet Products? I will warn you that it is crammed with data but we’ll try to break it into smaller pieces with regular observations. All of the base data was done by Kantar Research and published by the National Retail Federation (NRF).

An important reminder: Remember you can click on the data charts to get a better view. On some of the more detailed charts you can even expand this enhanced image by clicking on the button that appears in the upper right corner. This makes the details very clear and easy to read. I have also included a download link to an excel file at the end of the post so you can sort and print all of the individual company data on the Top 100.

Now, let’s get started with an overview: 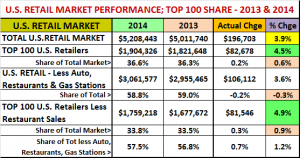 The Top 100 is obviously critically important, and right now it’s outperforming the overall market. We need to remember that this “Top 100 club” is in fact a contest. Every year companies drop out and new ones replace them. This can be the result of acquisitions or simply slumping sales. You’ll see the new additions during the course of the report. Dropping out of the Top 100 in 2014 were: Harris Teeter Groc. and Office Max – (both acquired); Ingles Markets, Roundy’s Suprmkt, Brinker Intrnlt (Chilli’s,Maggianos) and Bloomin’ Brands (Outback, Carrabas) – all with slowed sales.

Now let’s start “drilling down” on the Top 100. Here’s a summary of Regular and Online Retailers versus Restaurants.

Now that we have an overview of the Top 100, we’ll take a look at the “targeted” retailer segment. There are 85 total companies. How many are buying and selling Pet Products? Here’s where we can specifically see how Pets have become an integral part of the American Household and how fierce is the competition for the Pet Parents’ $.

These totals are only for the Top 100 and include only 1 Pet Chain and 1 Farm Store Chain as they were the only companies to make the list. Pet Products are sold in thousands of other outlets. The data from the 2012 U.S. Economic Census detailed over 150,000 retail stores selling Pet Items. With only moderate growth in store numbers (5%), the total would exceed 165,000 in 2014.

In the next segment we will look at the detailed list of the top 100. We’ll sort it by retail channel with subtotals in key columns. We’ll then break it into smaller sections for comments. Remember, at the end of the post there will be a download link for an Excel file with the data. This will allow you to sort it as you choose…by rank, alpha, pet/nonpet…it’s your call.

Remember online sales are included in the sales of all companies. 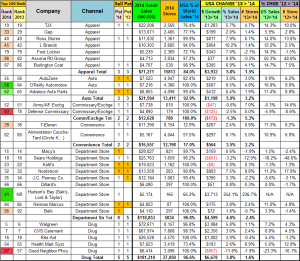 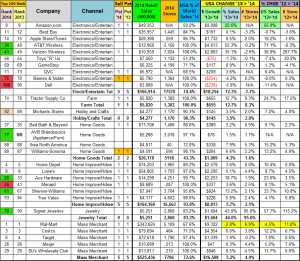 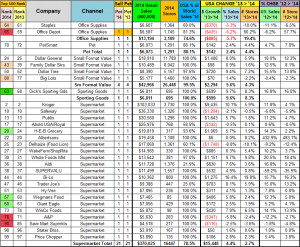 Although restaurants aren’t relevant in terms of Pet Products Sales, they are relevant in our daily lives. Almost all of the companies on this list are “fast food” or coffee.

There is a lot of detailed data here. I encourage you to use the link below to download the Top 100 data file in Excel. It is in ranked order but you can sort it however you like. This group of stores accounts for 37% of the entire $5.2 Trillion U.S. Retail Market and is gaining ground. It’s probably worth a second look.

As I was preparing this post, it brought to mind the ongoing migration of the U.S. Consumer. When you see facts about specific retailers, it seems to drive home the point that the market is constantly evolving. A few that really “hit home” with me are:

Take a look at the details to see what “hits home” with you…and let me know. I would love to hear your feedback.