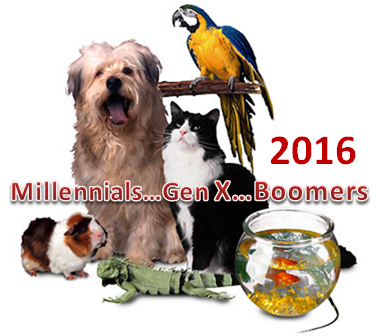 U.S. Consumers spent $7.4 Trillion dollars in 2016, up 235B (+3.3%) from 2015. Of this huge sum, $67.29B (0.91%) was spent on our companion animals. Despite increases in three industry segments, overall Pet Spending fell $0.46B (-0.7%) in 2016. Our initial analysis indicated that much of the decrease can be attributed to Pet Parents value shopping for Premium Pet Food. This shopping behavior which is so heavily driven by price has implications for all industry segments and retail channels. We will continue to monitor the situation and dig deeper into the pet spending demographics.

In this report we will look at Pet Spending for perhaps today’s most “in demand” demographic measurement – by Generation. Are the Baby Boomers starting to fade? Are Millennials stepping up? What about Generation X? These are very valid questions. Using data from the US BLS Consumer Expenditure Survey we will look for the answers.

We’ll start by defining the generations and looking at their share of all U.S Consumer Units (CUs are basically Households) 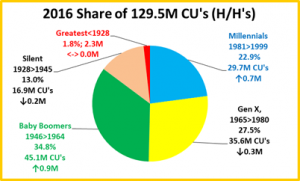 The only changes from 2015 are that the homeownership for the Silent Generation and The Greatest Generation both fell 1 percentage point as more of the older Americans moved to rental properties and alternative living facilities.

Next we’ll compare the Generations to the National Avg.: In Income, Spending, Total Pet Spending and Total Pet Share of Total $pending

It’s time to look at actual Total Pet Spending by Generation in terms of market share as well as the actual annual $ spent for 2014 through 2016. The 2016 spending numbers are highlighted in this and following charts:

We have seen the trendy nature of Food Spending over the years. It is possible that the young, connected Millennials are now the first to react and “buy into” each new “advance” in Pet Food.  Let’s look at the Supplies Segment.

Most groups cut back on Supplies spending in 2015. This was due to a combination of rising prices and an attempt to compensate for the cost of upgrading their pet food. Although prices moved slightly higher in late 2016, they were down for most of the year. Consumers strongly value shopped for food and spent some of the “saved” money on Supplies.

Next, we’ll turn our attention to the Service Segments. First, Non-Veterinary Pet Services

This segment finds a way to grow every year. In 2015, the older groups dialed back their services’ spending while they were upgrading their food. The younger groups more than made up the difference by spending $0.84B more. In 2016, Gen Xers cut back to help pay for their Vet Bills. Everyone else, especially Boomers, stepped up with a $0.97 increase.

Gen Xers and Millennials have markedly increased their commitment to Veterinary Services. In 2014, their share of Veterinary Spending was 30%. In 2016, it reached 45% – a 50% increase. This is a big, fundamental change in behavior.

The internet has become a huge part of our lives, affecting all aspects of our behavior, including retail spending. The convenience, selection and value offered by e-commerce is accelerating the evolution of the retail market as increasing numbers of consumers, across a wide range of demographics, migrate to internet retailers. The brick ‘n mortar retailers are not oblivious to this movement and are ramping up their commitment to the .com divisions of their businesses.

In this report we will take a closer look at the total e-commerce business in the U.S. This will include sales from non-store retailers as well as the internet sales from the .com divisions of companies who derive most of their business from brick ‘n mortar outlets. We are able to do this by combining data from 3 separate reports published by the U.S. Census Bureau.

Let’s get started. In 2000, the Total Retail economy (less restaurants) was $3.0 Trillion. By 2016 it had increased 63.0% to $4.9 Trillion. As you will see in the chart below, e-commerce did a little better than that – increasing sales by over 1300%. This whole report is very “chart intensive”. This makes the data easier to digest but in most cases, it also reduces the need for commentary as the conclusions are visually very obvious.

The increase is very consistent since the millennium. The only slow down came from 2008 to 2009 as a result of the Great Recession. However, while e-commerce growth notably slowed, we should remember that the total retail economy actually decreased in 2009 for the first time since 1956. 2010 and the years since the recession have shown strong increases in e-commerce as the new “value conscious” consumers looked to the internet for savings. Perhaps even more significant than the spectacular growth in dollars, is the growth in overall market share. E-commerce went from insignificance – less than 1%, to an 8% “force” in the retail market.

We see the annual dollars but are they consistent year round? Is there a pattern to e-commerce sales? Here is what the sales looked like by calendar year quarter in 2016.

As you can see there is the expected lift in the 4th quarter, about 33%, due to holiday sales. Then sales drop off in the 1st quarter as consumers recover from the holiday binge. Consumer holiday spending is being pushed earlier every year as the retailers intensify the competition for the consumers’ $, but so far it is still limited to the 4th quarter. This chart reflects the spending for 2016. However, this same pattern has been remarkably consistent, within 1%, for every year since 2000, with one exception. The 4th quarter of 2008 was only 28% of the year’s total. Anxiety over the impending economic crisis depressed consumers’ holiday spending in 2008. However, it returned to the normal pattern in 2009.

Now let’s take a more detailed look at e-commerce spending. One of the newest reports from the Census Bureau breaks the e-commerce $ down by retail channel so we can see how the brick ‘n mortar companies are doing in their online battle with non-store retailers. This is a new report and the latest data is for 2015. 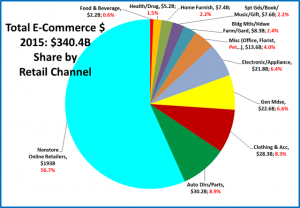 Obviously, the non-store online retailers are way ahead. The biggest surprise may be that the leading retail channel is auto/parts dealers. Overall this is a $1 Trillion dollar category so it shouldn’t be unexpected. However, it is generally not in direct competition with the other channels.

The performance of Clothing, General Merchandise and Electronics stores is pretty much expected. However, it’s interesting that Miscellaneous Stores rounds out the top 5. Office stores and florists are increasingly turning to online business as traffic drops in their retail outlets. Regarding Pet Stores, our recent spending reports for the Pet Industry have shown that value is major factor in consumer buying decisions across all segments. With the demonstrated savings and convenience of internet shopping, more pet retailers are increasing their internet footprint.

Drug/Health outlets and Grocery stores are at the bottom of the list. I am somewhat surprised by their low ranking but I believe that we have seen steps taken to address this situation. Amazon recently purchased Whole Foods and all of the major supermarket chains are increasingly developing their online ordering and delivery capabilities. Supermarkets are the single largest retail channel in the U.S. so this is a huge opportunity.

In 2015, Non-store retailers won the online “battle for the bucks” with their brick ‘n mortar rivals by a margin of 56.7% to 43.3%. Let’s look at recent history to see if the brick ‘n mortar folks are gaining any ground. 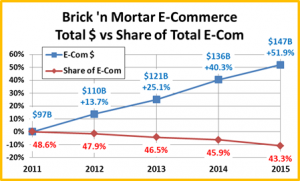 The e-commerce sales for primarily brick ‘n mortar businesses increased $50B (+51.9%) between 2011 and 2015 but their share of total e-commerce sales fell from 48.6% to 43.3% – a 10.9% decrease. Brick ‘n mortar stores, from major chains down to independent retailers are increasing their emphasis in online sales. However, so far, they are not keeping pace with their non-store competition. In addition to not being as experienced in this market, another handicap that they often face is that consumers are required to pay local sales taxes on purchases in any state in which the seller has a physical facility. This includes retail outlets, offices or a warehouse/distribution center.

This chart shows that traditional mail order and TV are not dead. Although they are losing ground, they still make up about 1/3 of the total sales for all non-store retailers.

The commitment to e-commerce certainly makes sense for the electronics outlets. Book, music, toy and clothing also reflect the patterns that we are seeing every day. Miscellaneous, which includes pet stores, was 5th in total e-commerce sales $ but moved up to 2nd place for brick ‘n mortar channels in terms of the e-commerce share of its total business. The commitment to e-commerce is strong and growing in this channel. The internet share of total sales for both General Merchandise and Grocery stores is rather small. However, we need to remember that these 2 channels are huge – totaling over $1.3 Trillion in annual sales. Their e-commerce is growing and every gain of 1% in share equals $13B.

The internet and e-commerce are here to stay and they are changing the retail marketplace. As we have said on many occasions, a participant either adapts to an evolving environment or goes extinct. It’s up to each company to decide.