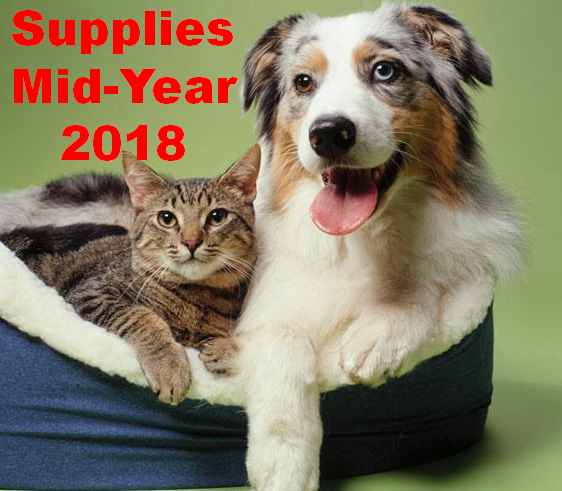 Like Pet Food, Pet Supplies spending has been on a roller coaster ride. However, the driving force is much different. Pet Food is “need” spending and has been powered by a succession of “must have” trends. Pet Supplies spending is largely discretionary, so it has been impacted by 2 primary factors. The first is spending in other major segments. When consumers ramp up their spending in Pet Food, like upgrading to Super Premium, they often cut back on Supplies. However, it can go both ways. When they value shop for Premium Pet Food, they take some of the saved money and spend it on Supplies. The other factor is price. Pet Supplies prices reached their peak in September of 2009. With a few brief exceptions they have been generally deflating since then – down -5.3% from 2009 at the end of 2017. Although it is not a hard and fast rule, Price inflation in this largely discretionary segment can retard sales, usually by reducing the frequency of purchase. On the other hand, price deflation generally drives Supplies spending up. Innovation can “trump” both of these influencers. If a new “must have” product is created, something that significantly improves the pet parenting experience, then consumers will spend their money. The perfect example of this is the successive waves of new food trends. Unfortunately, we haven’t seen much significant innovation in the Supplies segment recently.

That brings us to the first half of 2018. The spending increase in Pet Food slowed to +$0.25B. However, Supplies’ prices switched from deflation to inflation. Prices increased 0.6%, but not until May so most of the spending in the 1st half was already done. During this period Supplies Spending increased by $1.23B so there was no major impact from the upturn in prices. Although, we should note that the less price sensitive over $150K group accounted for $0.91B of the increase. If the Supplies segment could become less sensitive to minor inflation and increased spending in other segments it would be great news for manufacturers and retailers, encouraging stronger, stable growth like the last 24 months.

Now we will take a closer look at the two most popular demographic measures – age and income. In the graphs that follow we will compare spending for the Mid-year 12 months ending 6/30/18 to the previous period ending 6/30/17. In our graphs we will also include the 2017 yearend $pending. This will also allow you to see the spending changes in the 2nd half of 2017 and the 1st half of 2018.

Here’s how you get the change for each half using the $50>70K group as an example:

Now let’s look at what is happening in Supplies spending at the start of 2018 across the whole range of demographics. In our final chart we will list the biggest $ moves, up and down by individual segments in 11 demographic categories. Remember, the increase in the 1st half of 2018 was $1.23B, slightly more than the $1.15B in the 2nd half of 2017.

The Supplies segment had a great 12 months and 2018 is off to a good start but the “winning streak” is actually 24 months. It began in the second half of 2016. Since then, spending on Pet Supplies has increased $4.97B (+33.5%). It has also been widespread across America. Of 82 separate demographic segments, only 1 has spent less on Supplies in the last 24 months – the Greatest Generation. The reason for this decline is unfortunate but can’t be helped. The number of CU’s for these 91+ year old Americans has decreased by over 40% during the period.

What are the market conditions that helped to foment this “wave” of Supplies spending? We have to first note that the world changed for Supplies because of the great recession. Prices have been generally deflating since then and spending in the segment has become more sensitive to changes in price. Prices go up…spending drops, usually due to reduced purchase frequency. Prices go down… spending turns up. This situation did not exist prior to the recession.

The other factor is spending in other segments, especially Food. Whether it is a conscious decision or not, pet spending comes out of “one bucket”. A big increase in one segment can result in a cut back in others and big savings can generate more spending. The recent upgrade to Super Premium Food was such a big $ commitment that it magnified this effect.

In Mid-2016, the market was just coming off the first big wave to Super Premium and consumers were starting to value shop so $ were available. Supplies pricing turned down and continued to decline for 22 months. The time was ripe for a big lift in Supplies Spending, and it happened. At the same time a new wave was starting in the Super Premium movement, which could have derailed the Supplies lift. However, it turned out that the demographic segments that were upgrading  to super premium food were less focused on Supplies, so the impact was negligible. Supplies Spending continued to grow. That brings us to mid-2018. What comes next?

A new food trend may be starting but the lift may be minimal in 2018. Of bigger concern is inflation. Supplies prices turned up in May and by year end had increased +2.3%. We have not seen anything like this since the pre-recession, price glory days of 2009 when prices increased (+3.2%). Unless price sensitivity has gone away, this does not bode well for Supplies spending in the second half of 2018. We will have to wait and see. We’ll get the data in September.

The US BLS just released their Mid-Year Update of the Consumer Expenditure Survey covering the period 7/1/2017 to 6/30/2018. The report shows Pet Food Annual Spending at $31.36B (Food & Treats). The following charts and observations were prepared from calculations based upon data from that report and earlier ones. The first chart will help put the $31.36B into historical perspective and truly show you the roller coaster ride that is Pet Food Spending. 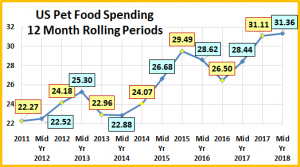 2017 was a great year for Pet Food Spending. The 1st half was up $1.94B and this trend grew stronger with a $2.67B increase in the 2nd half. However, the increase slowed markedly in the 1st half of 2018. We have noted in previous reports that Pet Food spending has been on a roller coaster since 2000, with 2 years up, followed by a flat or even declining year. This chart perfectly reflects this pattern since the recession driven, down year in 2010. This up and down “ride” has been driven by a succession of Food trends. 2011 saw the movement to “Natural” begin. This trend and spending increased through the 1st half of 2013. Then another change took place. The market had become much more competitive. Prices flattened out then began to fall in the 2nd half of 2013. Consumers began to look for value and they obviously found it as spending fell -$2.34B in the 2nd half, producing a net drop of -$1.22B for the year. 2013 was a game changer for this segment as it began an extended period of deflation which continued through 2018. Midway through 2018, Pet Food prices were still 2.3% lower than in 2013.

In the 2nd half of 2014 spending turned sharply up. This was the beginning of the movement to Super Premium which was initiated by the 25>34-year-old Millennials. In 2015 this trend took off, especially with the Boomers, as spending rose $5.4B. At the same time, the Pet Food spending of the 25>34 yr olds dropped. At first, we thought they had rolled back their upgrade. However, it turns out they were leading the way in another element of the trend to Super Premium – value shopping. For consumers, the Super Premium upgrade movement consisted of 3 stages:

Now back to our timeline. After the big lift in 2015, those CU’s that upgraded went into “value shopping” mode and Pet Food spending fell -$2.99B in 2016, which was right on schedule with our timeline. However, the Super Premium cycle was not over yet. The benefits of the product along with the very price competitive market led to a much deeper demographic penetration of this trend and spending increased $4.61B in 2017. This huge lift immediately after a down year is very unusual. Usually the biggest lift occurs in 2nd year of the 3-year cycle. 2018 started off slowly with only a $0.25B increase. It most closely resembles the 1st half of 2012. If that pattern is true to form, then we can expect a $1+B increase in the 2nd half of 2018. Two patterns in our timeline graph support this expectation.

Now we will take a closer look at the 2 most popular demographic measures – age and income. In the graphs that follow we will compare spending for the Mid-year 12 months ending 6/30/18 to the previous period. In our graphs we will also include the 2017 yearend $. This will also allow you to see the change in the 2nd half of 2017 and the 1st half of 2018.

The first graph is Income, which has been shown to be the single most important factor in increased Pet Spending. Here’s how you get the change for each half using the $150K+ group as an example:

That brings us to the obvious question, “What is happening in Pet Food spending at the start of 2018 across the whole range of demographic categories?” We will endeavor to answer that in our final chart. We will list the biggest $ moves, up and down by individual segments in 11 demographic categories.

Remember the total increase in the 1st half of 2018 vs the same period in 2017 was pretty bland – up $0.25B. However, I think that you will see that this bland result came from some rather tumultuous spending behavior…Always look deeper.

Why is the first half performance of this younger group important? Consider this: The 25>34-year-old Millennials led the way in the super premium food upgrade in the 2nd half of 2014. After becoming committed to their new high quality, high priced pet food, they then turned to value shopping and their spending dropped. This behavior was repeated by 2 waves of other segments as super premium made an ever-deeper penetration into the market.

Could the spending lift by this group indicate a new Pet Food trend? There are several possibilities “on the table”, including clean label transparency, customization, sustainability or maybe a combination. It is unlikely to cause a huge lift like super premium but could drive up spending in the 2nd half of 2018. There is one more indicator – the lift in the Advanced College Degree segment. This is another group that “buys in” early to scientific, nutritional improvements.

The Pet Food segment has become incredibly complex. We’ll see what the 2nd half of 2018 brings.