The USBLS just released their Mid-Year Update of the Consumer Expenditure Survey covering the period 7/1/2014 to 6/30/2015. The following charts and observations on Pet Food Spending were prepared from calculations based upon data from that report and earlier ones.

The most recent report shows Pet Food Annual spending at $26.68 B. (Food & Treats). The first chart will help put that into perspective with recent history. 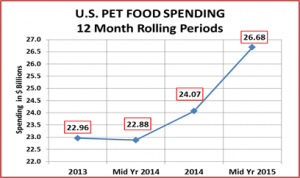 This chart, with its rolling 12 month totals, gives a good overview of the recent trend in Pet Food Spending. However, for the best comparison, we should look at like time frames: 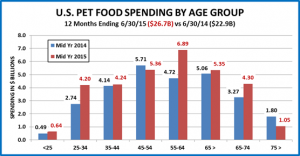 This report is quite frankly great news for the industry. If you have a Pet, you invariably buy Pet Food. Increased Pet Food spending may reflect the movement to more premium foods but it also is an excellent indicator that the number of U.S. pet households is strong and growing. In an earlier post on Pet Products we noted that our spending on Pet Food & Supplies showed a 50 year commitment to our pets – from age 25 to 75. With this report, we saw a 30.6% increase in Pet Food Spending from the Under 25 age group. Admittedly, their spending numbers are still small. However, they are moving up – quickly. I’m sure that you’ll all join me in welcoming these young Millennials aboard the “Pet Parent Express”. We know that they will enjoy it and it’s a ride that lasts a lifetime! 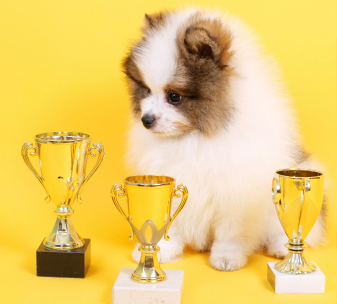 There is no getting around it. Pets are big part of our lives and our spending in America. However, there are distinct differences in the demographics of spending between the industry segments. The Prices in the Service Segments, especially Veterinary have been strongly inflating. Sharply higher prices affect the spending of a wider range of groups. Veterinary Spending was up $3B from 2013 despite a $1B drop in spending from consumers making $50K or less. Both the Food and Supply segments have been deflating in recent years so a lower H/H income is less of a factor. Also Pet Products (Food & Supplies) are a “must spend”. If you have a pet, you spend money on Pet Products . For this report we’ll take the services out of the mix and just look at Pet Products.

“Which of the 80+ individual segments are performing best in Pet Products?” The chart below identifies the best and worst performing segments in key demographic categories. The performance of each segment was determined by comparing the share of total pet spending to the share of households. Ex: If a segment accounts for 10% of households but generates 15% of Pet Spending the score is 15/10=1.5 = 150%…a great performer. However, if the situation was reversed, 10/15=.67 = 67%…not so good.

Married Couples with children, Homeowners vs renters, Rural vs Center City, Larger family H/H’s, White Not Hispanic, the 45-54 yrs age group… Some of the best and worst performers are exactly what one would expect.

We have identified the best/worst performing segments. Which ones are “on the move”- the segments within each category with the biggest $ gain or loss (or smallest gain) in Pet Products Spending from 2013-14. 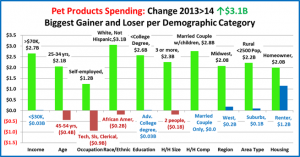 Highest Education in H/H – All education groups had an increase in spending. The group with less than a college degree is leading the way in the increase…a nice surprise.

H/H Size – It just takes 3 or maybe 1. Even singles had a significant increase in their spending. Two person H/H’s showed the only decrease. As you will see in the next category, these twosomes were not married couples.

H/H Composition – Married Couples with children drove the increase. No groups had a negative number. The “Married couple only” group was flat in spending. Even single parents showed an increase.

Area Type – Consumers in areas with under 2500 population, both inside and outside of Metro areas, are showing the most growth. Suburbs, the biggest spending segment is showing the slowest growth. In fact, spending per H/H is actually down slightly.

Age – Good news. The 25>34 age group is showing the biggest growth. Bad news. The richest, highest spending segment, 45>54 is down. Much of this comes from a drop in numbers but their spending per H/H is also down

Major Issues: 1.The ongoing concern of more racial/ethnic diversity in Pet Ownership. 2. Getting the under 25 age group started. 3. Two big spending groups are slipping – the 45>54 age group and consumers residing in the suburbs. Both are spending less per H/H. The ongoing deflation in Pet Products could be a factor. Innovative, new products is certainly one way to motivate these firmly established “pet parents” to spend more.