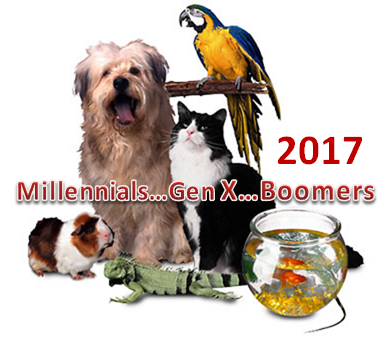 U.S. Consumers spent $7.8 Trillion dollars in 2017, up $383B (+5.2%) from 2017. However, the pet industry had an even better year. Americans spent $77.13B, 0.99% of total expenditures, on our companion animals. Increases in the three largest industry segments drove overall Pet Spending up $9.84B (+14.6%) in 2017. U.S. Consumers are heavily driven by value and in 2017 they found it almost “across the board” in all industry segments. Even the Services segment, which had a small decrease, had an increase in purchase frequency. Pet Parents just paid less. We’ll continue to monitor the situation to see if this spending behavior continues or evolves.

In this report we will look at Pet Spending for undoubtedly today’s most “in demand” demographic measurement – by Generation. Baby Boomers have driven the industry. Are they starting to fade? Are Millennials stepping up? What about Generation X? Using data from the US BLS Consumer Expenditure Survey we will look for the answers.

We’ll start by defining the generations and looking at their share of U.S Consumer Units (CUs are basically Households) 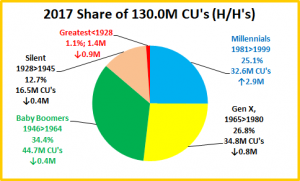 The most significant change is that Millennials are “coming of age” with increases in all areas. The oldest Americans are fading in all measurements but homeownership, which registered an increase from all groups but the Gen Xers.

Next, we’ll compare the Generations to the National Avg.:

Now, let’s look at Total Pet Spending by Generation in terms of market share as well as the actual annual $ spent for 2014 through 2017. The 2017 numbers are boxed in red (decrease) or green (increase) to note the change from 2016.

The Boomers are back in a big way and they brought their younger spending partners to help!

Pet Food Spending is driven by trends. Perhaps the young, connected Millennials are the first to react and “buy into” each new “advance” in Pet Food so their behavior may predict the future of the segment. Now, let’s look at Supplies Spending.

Most groups cut back on Supplies spending in 2015 due to a combination of rising prices and an attempt to compensate for the cost of upgrading their pet food. Supplies started their comeback in 2016 when Consumers value shopped for food and spent some of their saved money on Supplies. Then Supply prices dropped in 2017 and basically everyone under 90 years old recognized the value and spent more on Supplies – $2.74B more!

Next, we’ll turn our attention to the Service Segments.

This segment has always found a way to grow every year – until 2017. The small drop in spending was caused by a combination of factors. An extremely competitive environment created deals so even with increased frequency, consumers paid less. Another factor is age. Services are often of greatest benefit to older pet parents. In 2017 the number of “over 53” CU’s fell by 1.7M. Small increases by the Millennials and Gen Xers couldn’t make up the difference.

Gen Xers and Millennials have consistently increased their commitment to Veterinary Services. In 2014, their share of Veterinary Spending was 30%. It is now 45.1% – a 50% increase. This is a big, fundamental change in spending behavior.

Gen Xers and Millennials are ultimately the future of the industry, so everything should be done to encourage them and to make their Pet Parenting experience easier and better. However, by any spending measurement, the “here and now” of the Pet Industry is still the Baby Boomers.