Since the great recession, price has become perhaps THE critical factor in the buying behavior of U.S. Consumers. In our recent reviews of Consumer Pet Spending we saw that inflation and deflation can affect retail spending. However, there is not a universal rule. Price changes, up or down can have a different impact on the different Pet Industry Segments. Deflation can spur spending in a “discretionary” segment but retard it in a “need” segment. Moderate inflation is normal and expected by consumers. However, when it gets out of hand, it can negatively affect sales.

In this report we’ll update the changes in the CPI (from the USBLS) since December, both for total Pet and the individual segments.  However, before we get to that, let’s do some “pricing” groundwork. We’ll take a look at some relevant facts from a study on The Shopping Habits of American Women done by Blackhawk Engagement Solutions and presented in a webinar by Retailing Today.

First, what matters most in the shopping decision? 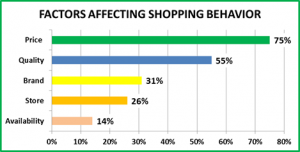 Obviously, price matters most in today’s world. However when you consider Price + Quality = Value, then Value is also twice as important as brand – a big change from pre-recession days.

If Price is so important, then how does the shopper compare prices? With 71% of shoppers owning and using a smartphone daily, it’s not surprising that retail websites and other online sources, like Amazon and Google are usually the first choices. However, preference does vary by product category.

Here’s how consumers price shop for pet products. You may be surprised by what is #1.

For Pet Products, the # 1 place for checking prices is…in the retail store.  The study covered a variety of product categories including clothing, furniture, sporting goods, toys and more. Only 2 categories had retail stores as the consumer’s first choice – Pet Products and Grocery. Grocery is certainly not surprising, with fresh food being such an important share of the category’s business.

The preference for “in store” price checking doesn’t say that you don’t need an effective web presence (with a store pickup option) or that shoppers don’t use their smartphones to price check pet products when they are standing in the retail aisles. Perhaps, it just “speaks to” the personal nature of our relationship with our companion animals.

Retail price and “value” are more important than ever in the consumer products business and the Pet Industry is no exception. Let’s see what has happened with the Pet Consumer Price Indices since last December.

This chart shows the change from December 2015 to May 2016 and how the average for the first five months of 2016 compares to the same period last year. 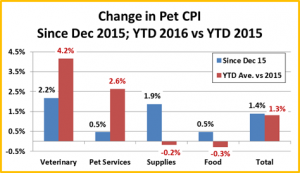 To understand and appreciate what is happening, you need to see it. Take a look at the monthly flow. 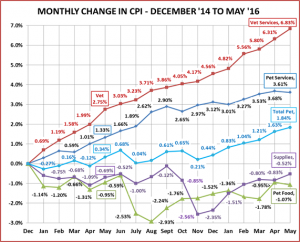 Veterinary shows an unbroken string of increases and is even accelerating. The increase in the Service segment has clearly moderated beginning in September of last year. The product segments are on rollercoaster(s). Look at those record drops in the second half of 2015…but both Food & Supplies seem to be slowly recovering. 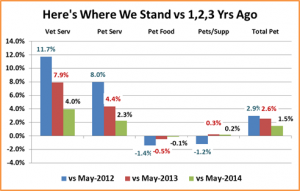 Vet Services: Up about 4% per yr & increasing

Pet Services: Increasing about 2.3% per year but moderating.

Total Pet: Being pushed up ”↑” by services while products move to flat “↔”

Pricing in the Summer and Fall of 2015 was very volatile with record CPI drops in Products. We’ll see what 2016 brings.

According to the numbers from the APPA, the total U.S. Pet Industry increased $2.24B (3.86%) in 2015. This was not quite the projected 4.4% increase and slightly less than recent years. If you factor in “Petflation”, the increase in the amount of goods and services sold was 2.86%. However, this means that 74.1% of the industry’s growth was “real”. Only 25.9% came from price increases. This is less than last year’s 83% real growth…but still very good.

In this post we’ll take a closer look at the performance of the total market and importantly, the individual segments. We’ll see which segments are “driving” or “retarding” the industry’s growth. The report will cover 2015 and also put this year’s numbers into perspective for the period from 2009 to 2015, the time since the great recession.

Here are the details for 2015. Some key data is highlighted:

Now let’s take a look at the performance of the individual segments from 2009 to 2015 starting with Food!

The deflationary years are the most concerning. We have only had 4 deflationary years in Food (2000 was the other) and now we’ve had 2 in a row. The 2010 deflation came after a combined 20% Food CPI increase from 2007 to 2009 – in the heart of the recession and real growth ceased. The decrease in 2010 brought a positive response from the consumer – adjusted growth exceeded retail sales.

The years from 2011 to 2013 brought CPI increases in the 2+% range. The increases dropped the percentage of real growth below 50%. In 2014 & 2015, prices fell so the consumer paid less but the actual growth rate improved. The big concern with deflation is the impact on the supply and distribution channels and ultimately on the consumer… thru reduced choices.

2016 Retail Food sales are projected to increase 4.2% to $24.01B. This may be a little high. The 3.5% range seems more likely unless we have a turnaround in pricing. I haven’t projected the CPI for this segment or others. It’s a little too early, especially with the volatility in Food and Supplies. Recently, the December and January Pet Food CPIs were up. February and March were down. Remember prices were pretty stable for the first half of 2015…then we had the biggest drop in history. If prices can stabilize or even turn up 0.5% in 2016, then the 4.2% increase in revenue becomes more likely.

In Supplies the first deflationary year was 2010. However, we should remember that inflation has generally not been a big issue in this segment. From 1997 to 2004 Pet Supplies increased in prices at an annual rate of under 0.5%. Then in 2005 and continuing through 2009, the CPI increased an average of 2.75% per year. This doesn’t sound like much but remember it was 5 times the rate of the previous 7 years and 2 of the biggest increases (+3.0%) came in 2008 and 2009, in the heart of the recession. The consumer reacted – and bought less.

Prices fell 1.7% in 2010 and the consumer bought more. The prices briefly stabilized in 2011 and then began moving downward. The consumer’s reaction was to buy more. 2015 brought another pricing pause, almost exactly equal to 2010. Overall Retail growth slowed slightly to 3.1% and adjusted growth dropped from 4.6% to 3.1%. The good news for the sellers is that this growth was 99% real and more profitable, exactly the same consumer reaction as in 2011. 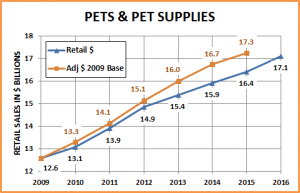 In 2016 Pet Supplies are projected to increase 4.2% to $17.09 B. That seems a bit high. 3.5% may be closer. In 2015 there was some indication that this segment might be truly pulling out of the deflationary spiral. However, a record CPI drop in the second half produced a year similar to 2011. Remember, 3 years of deflation followed that year. However, January through March of 2016 have seen moderate monthly increases in the Supply CPI. I’ll update you throughout the year.

There are no real negatives regarding this segment. It is growing strongly and consistently, especially since 2011. Last year the growth even reached double digits at 11.8%. However, it is a small segment, only accounting for 9.0% of the total market…but that’s better than 8.3% in 2014. 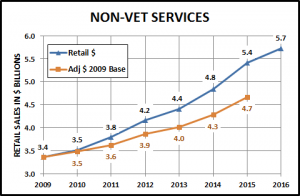 The final individual segment is Veterinary Services. This segment accounts for over 25% of the Total Pet Market.

Regular veterinary visits are generally viewed as a “need” not a “want”. The high inflation rate over the years finally generated a consumer response in 2011…they cut back on veterinary services. Consumers have turned to OTC medicines, supplements, treatments and home testing whenever possible. Pet Health Insurance is growing and there may be fundamental changes in Veterinary Clinics – more chains and groups. Major medical procedures and emergency care will always be needed but it seems steps should be taken to make regular veterinary care more affordable. 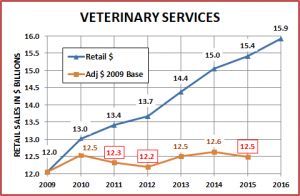 Veterinary Services are expected to hit $15.92 B in 2016, a 3.2% increase. If that happens, we will probably have another decrease in the amount of services. Prices are already up 1.7% from December and we’re only through April.

The great Total Pet numbers are a big reason why so many people are attracted to the Pet Industry. The retail numbers are also consistently good across the segments. However, as I’ve said so often, when you look a little deeper into “petflation” and the actual amount of goods and services sold, you find that the total industry numbers are generated by two undesirable situations that tend to counteract each other when the numbers are combined. Specifically: 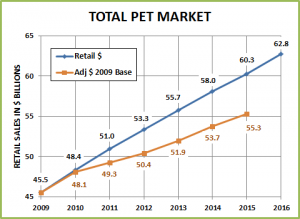 In 2016 the Total Industry is expected to increase 4.1% to $62.75B. If the deflation and inflation both improve, we could see an inflation rate of perhaps 1.25%. This would generate a “real” increase of 2.85% and 2016 adjusted sales of $56.9B in the chart above. Bottom Line: We need moderation in the CPI trends for Pet Food and Veterinary Services.

Finally, always look beneath the surface in your business numbers. The headlines may not tell the whole story! 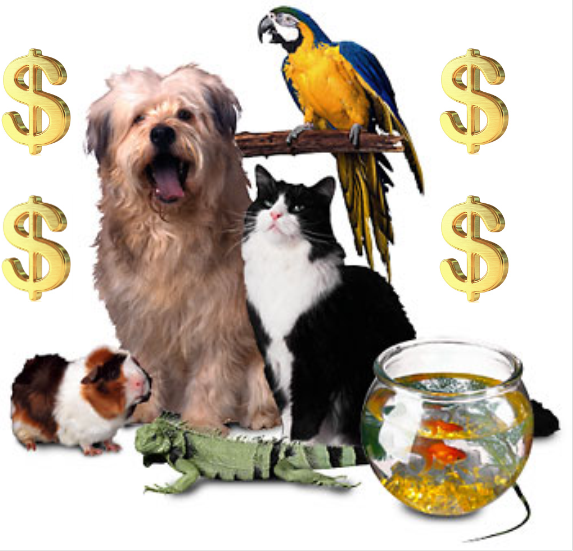 In a reversal of the normal flow, we first looked at the performance of each of the 4 Pet Industry Segments in the Consumer Spending Survey conducted by the USBLS. We saw a definite disparity between the segments, both in the overall performance and in the demographics of consumer spending behavior. Now let’s put these different parts together to get the Industry Total covering the period 7/1/2014 to 6/30/2015.

Total Pet Spending is now $63.38 B. Let’s put that into perspective with recent history. 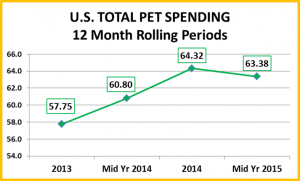 After strong growth in 2014, spending in the first half of 2015 was down. Let’s compare like time frames:

Now, let’s look at the numbers by Industry Segment: 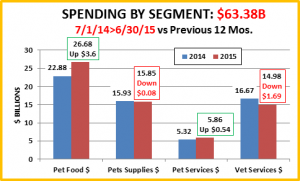 In this chart we look at $ change by segment overall and by 6 month time periods. 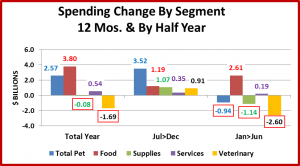 Total Pet Spending increased $2.58B in the 12 months ending June 30, 2015 versus the same period a year earlier. Two segments were up and two were down. In the next chart we’ll “Show you the money”! We’ll identify the specific segments within each demographic category with the biggest gain or loss in Total Pet $pending.

Without the spectacular performance by Pet Food, this would be a completely different report. Food was the positive “Driver” across almost all demographic segments. Some of the winners and losers were the “usual suspects” – High income and White, not Hispanic were big gainers. Central City and Singles lost ground. However, there were some groups that are new to the chart. Among the winners were the 65>74 age group, 2 person H/H’s, Married Couple Only and Homeowners without a mortgage. Actually these 4 groups all reflect many demographic characteristics of older Baby Boomer H/H’s. The under 25 group also had a good showing and are also more likely to be 2 person households. Unusual losers were Homeowners with mortgages and Mgrs/Professionals. In September, we’ll see how the second half of 2015 matches up against the “dream” second half of 2014.