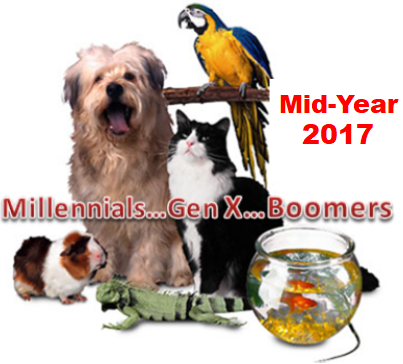 In this report we will update Pet Products Spending for arguably the most popular demographic measurement – by Generation. Baby Boomers built today’s Pet Industry, but they are getting old. What happens next? Most of the conversation revolves around Millennials. They are obviously the future but they are still young and a long way from spending “maturity”. This means that we can’t ignore the Gen Xers. They don’t get much publicity but they are next in line to the Boomers. The numbers come from or are calculated from data in the US BLS Consumer Expenditure Survey.

First, let’s define each generation and look side by side at their share of Consumer Units (H/H’s) and Total Spending.

There is the obvious difference in age to be considered and differences in behavior. However, we have also learned that there are key Consumer Unit characteristics, like income, family situation and home ownership that make a difference both in Total Spending and in Pet Spending. Let’s look at some of these key differences.

Next we’ll compare the Generations to the National Average in Income, Spending, Pet Products Spending and Pet Products Share of Total $pending

Now let’s look at Pet Products $ spent by Generation and their share of the total.

The Pet Products $ increase was primarily due to the Gen Xers. Let’s look at individual segments. First, Pet Food..

We are still seeing the impact of Pet Food Value Shopping in 2016. However, 2017 started off strong for Gen X and the Boomers. The Millennials are once again spending to a “different beat” as their pattern is the exact opposite. Now, Pet Supplies…

There was a steep drop in Supplies spending in 2015 as consumers upgraded to Super Premium Pet Food. By the first half of 2016, Supplies spending flattened out as consumers shopped for price on food and used some of those saved dollars for Supplies. The spending lift which began in the second half of 2016 crossed generational lines, especially from age 37 to 89. However, the biggest drivers were the Gen Xers and the Baby Boomers, who accounted for $2.42B (93.4%) of the total $2.59B increase.

In the final chart we will compare each generation’s share of spending on Total Products, Pet Food and Pet Supplies to their share of CU’s and see “Who is earning their share?” Then we will review their actual performance numbers.

A Final Word – There’s no getting around it. In terms of Pet Products Spending, the 12 month period from 7/1/16 to 6/30/17 belonged to the Gen Xers. They produced $2.33B of a $2.41B increase with a strong performance in both Food and Supplies. They also “more than earned their share” in both segments. They stand next to the Baby Boomers and it appears that they are ready and able to ultimately take their turn at the top of Pet Products spending pyramid.

The US BLS recently released their Mid-Year Update of the Consumer Expenditure Survey covering the period 7/1/2016 to 6/30/2017. In our analysis of Pet Supplies Spending we saw that everything had turned “gold”. Spending was up across virtually every demographic segment. On the other hand, Pet Food Spending was down slightly. However, a deeper “dive” into the data showed evidence of a strong increase in the first half of 2017. Now we turn our attention to Pet Services. The Mid-year numbers show that spending in this segment was $6.56B, down $0.26B (-3.8%) from the previous year. This segment is known for consistent, albeit small increments of growth. This is the first decline in any 12 month period in 4 years. Let’s look at recent Services spending history: 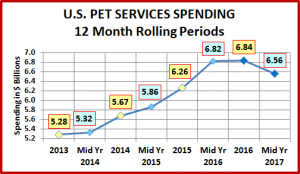 Here are the Mid-Year 2017 Specifics:

Pet Services is by far the smallest industry segment. However, except for 2010 and 2011, the period immediately following the Great Recession, it has shown consistent annual growth since 2000. Spending in Food and Supplies have been on a roller coaster ride during that period. Service Spending has more than tripled since 2000 with an average annual growth rate of 7.6%. Spending in the Services Segment is the most discretionary in the industry. Over all these years the inflation rate has averaged over 3.2%, with little or no negative impact on spending. The primary reason is that Service Spending is very strongly skewed towards high income households. After the recession inflation has been slowing, down to the 2+% range. In mid 2016 inflation dropped below 2% and continued down to 1.1% by the end of 2017. This is primarily due to increased competition from free standing businesses but also an increase in the number of Pet Stores and Veterinary Clinics offering pet services. While prices still went up slightly, a big factor in the flat then declining sales during this mid-year report is today’s consumers’ value shopping for the best price.

In Pet Services the big news is the negative downturn in spending in the first half of 2017. The following chart will show the segments with the biggest drops in Services Spending during that time period across key demographic categories.

Once again the group consists of many of the traditionally biggest spending demographic segments in the industry. We know that there is growing competitive pressure in the marketplace in this segment and in today’s world, virtually everyone shops for the best price. This could be a reason behind some of the decline. There is another likely situation. Every one of these groups had a significant increase in Pet Products (Food & Supplies) spending in the first half of 2017. They may be making up for the increased Products spending by cutting back on their spending in other segments. Pet Services is probably the most discretionary spending segment in the industry so it is a prime candidate for trading Pet $. In this situation, consumers may not be foregoing services entirely, just slightly dialing back the frequency.

Although 75% of the demographic segments had decreased spending in the first half, there were some positives.