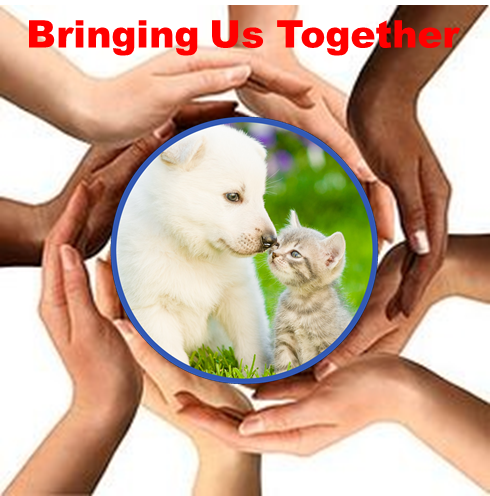 In our earlier demographic analyses, we noted specific instances of minority “under performance”. In this report, we will drill deeper to get more specifics on the Pet Spending by Minority Groups – Hispanics (All Races), African Americans and Asians. The U.S. is growing more ethnically diverse every day so this is a situation and an opportunity which needs to be investigated.

Note: All the numbers are calculated from or taken directly from the Annual US BLS Consumer Expenditure Survey.

Let’s get started by looking at the Racial/Ethnic make-up of the U.S. 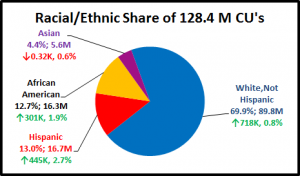 Now let’s take a look at some of the characteristics that we have found to be important in pet spending behavior.

Next, we’ll compare each to the National Avg in Income, Spending, Pet Spending and Pet Share of Total $pending.

It’s time to look at actual Dollars Spent. We’ll review the spending on Total Pet and each industry segment in terms of share of sales as well as a 3 year history of each of the Racial/Ethnic Minority segments.

In the graph showing market share of Total Pet, as well as those that follow, the overwhelming dominance of White Americans in terms of spending on their pets is all too apparent.

Now, we will turn to the Service Segments. We’ll begin Non-Vet Pet Services.

One thing that we should always keep in mind is that all these numbers are averages. These Racial/Ethnic Groups are made up of individuals and are represented in virtually all Demographic Category Segments. Examples: 9% of all people with a Master’s Degree or higher are African Americans. 5% of the CU’s with an income above $200K are Hispanic.

However, overall, these rapidly growing racial/ethnic groups are not keeping pace with U.S. Pet Spending. In fact, they are losing ground…at an alarming rate. Consider this: Minority spending on Pet Products, just Food & Supplies, went from $5.3B in 2013 to $5.6B in 2015 – a $0.3B (5.0%) increase. At the same time, the number of minority CU’s increased 4.9%. So, all of this increase essentially came just from having more CU’s. At the same time, the White segment had a $6.2B (19.0%) spending increase with only a 1.1% increase in CU’s. The Result: The Total Minority Group’s market share of Pet Products spending fell 10% in just two years, even with a 5% increase in spending.

Asian Americans come from a variety of cultures, each with their own history regarding Pet Ownership. They certainly have the income and recent increases in Pet Food spending indicate the number of Asian Pet Parents may be growing.

Hispanics and African Americans are the two fastest growing groups and they share certain key characteristics. Their income is 20-30% below the National Average. Homeownership is 25-33% less. They are more likely to live in Center City areas. All these factors tend to reduce Pet Spending and ownership. The African American group has the lowest numbers in these measurements and a low percentage of Pet Households. The Hispanic group has another characteristic which is relevant to spending – kids. Having twice as many children under 18 per CU can only add to their financial pressures.

Most of the factors reducing Pet Spending are societal rather than just industry issues. However, the Pet Parenting desire still appears to be strong in these groups. We see it in Hispanic Spending on Food and especially Supplies. Also, despite having the lowest average income, African Americans still spend more on Veterinary than any other minority. The Pet Industry should recognize the situation as both a challenge and an opportunity. We need to do what we can to encourage and facilitate Pet Parenting in these groups.  It will pay “dividends” to everyone. 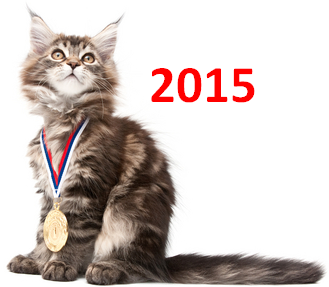 We’ll get started with the best “Performing” segments. To determine a segment’s performance we simply compare their share of the overall Pet Spending to their share of the total CU’s. (Financially independent Consumer Units) Example: If a segment spends 15% of all Pet $ and has 10% of all the CU’s, then their performance rating is 15/10 = 150% – very good. If their share of spending was only 5%, then their performance rating is 5/10 = 50% – not so good. This method puts every segment on a level playing field…then, may the best one win. Once again, all numbers in this report were calculated from data provided by the US BLS in their Consumer Expenditure Survey.

Here are the best and worst performers for 11 demographic categories, ranked by performance – from high to low.

Most of the “winners and losers” are the same as last year.  Changes from 2014 are “boxed”. We should note:

Now let’s truly “Show you the money”. In the next chart, we’ll look at the biggest $ changes in spending from 2014. As a rule there are both positive and negative situations. However, in 1 category every segment spent more in 2015.

In this chart, we truly see the impact of the Boomer’s food upgrade on Pet spending and how 2015 was radically different from 2014. There are new winners and losers in virtually every category. In a few cases they just switched positions. 2015’s winner was 2014’s loser and vice versa. We’ll take a look at one demographic category at a time. 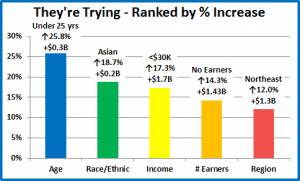 2015 was a year of extremes which is best illustrated by the situation in 2 Industry Segments – Food and Supplies.

Spending in the other 2 segments basically cancelled each other out. Services continued their steady growth ↑$0.58B, driven primarily by convenience in the under 55 age group, but with income always a factor. Veterinary spending was down ↓$0.47B and continued to be negatively impacted by a high inflation rate. This was somewhat mitigated by the strong commitment from the oldest Americans to the care of their companion animals.

You have seen the individual demographic winners and losers. However, when you step back it often seems to be 2 ends against the middle. Let’s look at what that means in terms of 2 important demographic measures – Income and Age:

AND NOW…FINALLY, WHAT YOU HAVE ALL BEEN WAITING FOR…THE “ULTIMATE” PET CONSUMER UNIT

The “Ultimate” Pet Spending Consumer Unit consists of 3 people – a married couple with an 18+ year old child, still living at home. Mom and Dad are in the 55 to 64 age range. They are White, but not of Hispanic origin. At least one of the Parents has an advanced College Degree. Everyone works in the CU. Mom and Dad have their own business but their child also works, at least part time. They’re doing very well with a total Household income in excess of $150K. They own their home or to be more accurate, share ownership with the bank. They live in a rural area (under 2500 pop.) in the West, but it is adjacent to a good sized metropolitan area. This gives them plenty of space for their companion animals, but they are still close enough to commute to the City for business, shopping and entertainment – the benefits of the Urban environment…We all wish that there were more of them.

That “wraps it up” for this report. We look forward to the US BLS Mid-Year 2016 Update in May. 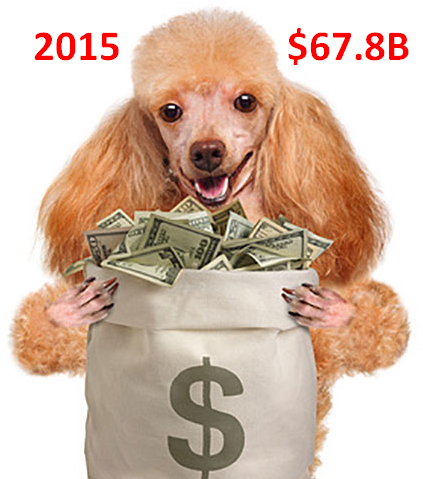 As we have reported, the 2015 Consumer Expenditure Survey conducted by the US BLS with “field” work by the Census Bureau determined that Total Pet Spending in the U.S. reached $67.75B – an increase of $3.43B (+5.3%). After a detailed analysis, we concluded that the increase was primarily driven by the Baby Boomers, who elected to upgrade their Pet Food in 2015. However, that’s not the whole $67.8B story.

Where did the bulk of the spending come from? In this report we will look at Total Pet Spending in terms of 10 demographic categories. The goal is to determine what groups were responsible for most of the overall spending. Our target number was to find demographic segments in each category that account for 60 to 80% of the total. In some cases this was easy – Homeowners. In other situations, we had to bundle individual segments together to reach our 60% “minimum”. Ex: Ages 45>74

Knowing the specific group within each demographic category that was responsible for generating the bulk of Pet Spending is a first step in a targeted marketing program. In an upcoming “awards” post we will drill even deeper to show the best and worst performing demographic segments for 2015! But first…we’ll “show you the money!”

In the 2 charts that follow, the demographic groups appear in ranked order by Total Pet market share from highest to lowest. I also included their share of total CU’s (Financially Independent Consumer Units). This allows us to see how each performed versus the size of the demographic group.

Comments: The apparent spending disparity in regard to Race/Ethnicity is an obvious concern which should be investigated. The correlation between homeownership (especially with a yard) and pet spending has been true from the earliest days of the industry. Putting 2 people together is another “good bet for pet”. Yes, income does matter, especially with the inflation in the Veterinary Segment and the current movement to upgrade Pet Food. However, how you make the money isn’t as important. Educated consumers are also more likely to spend more. They generally make more money and may respond better to the value of higher quality nutrition – at a higher price, as well as the need for regular Vet visits. Finally, as parents grow older and their children start to leave home, they turn their attention and spending to their Pet Children.

Most of these answers are the ones that we expected. However, as we have learned from past experience, it is always a good idea to look “beneath the surface” of the overall numbers. In a follow up post, we will drill deeper into the data. We will determine the best and worst performing segments in each demographic category and specifically, who generated the largest increases and decreases in Pet Spending in 2015. As usual, expect some surprises.

Pets are obviously an integral part of the American way of life…but there is still room for the relationship to grow.