Blog - Latest News
You are here: Home1 / Pet Market2 / Retail Channel Migration in the U.S. – Consumers are on the move... 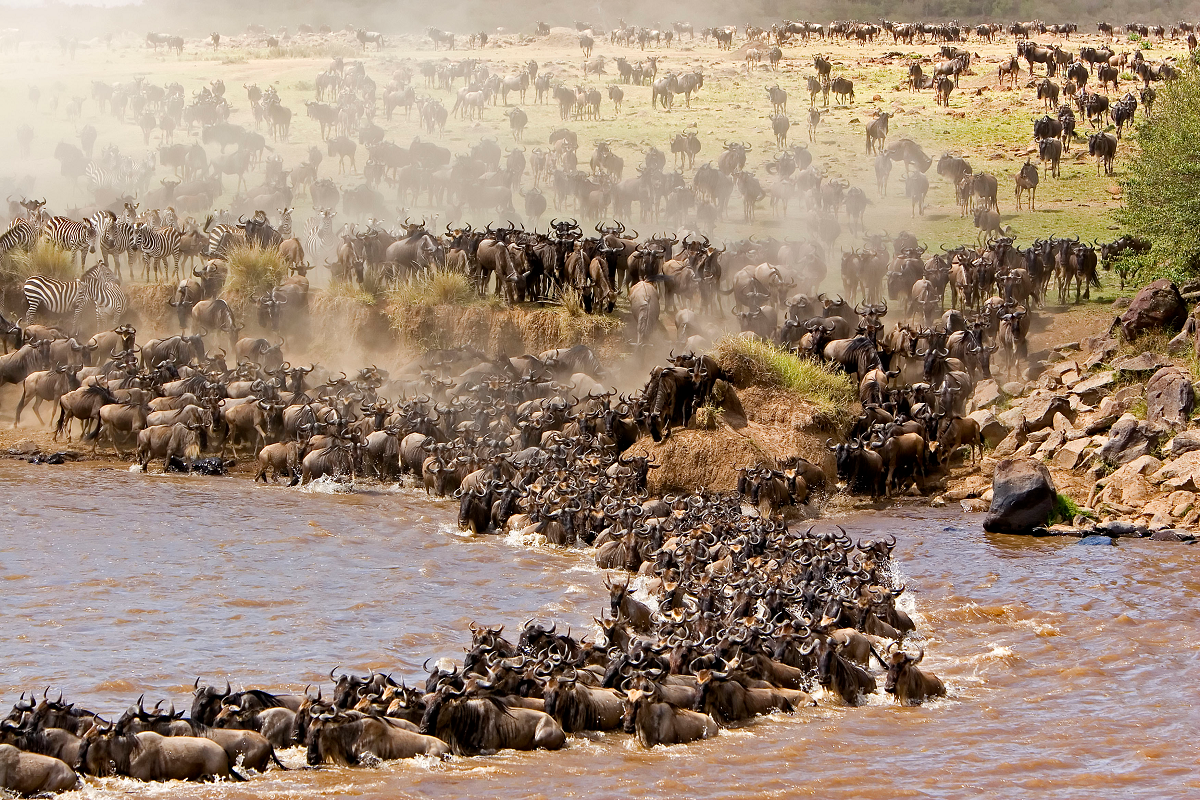 We are all familiar with the reality of migration in the world around us. Massive flocks of birds fly south for the winter. Huge herds of herbivores migrate across the plains of Africa. Much of the population of North America came as a result of migration from other parts of the world. Why? The reason is ultimately the same – both people and animals were seeking survival, opportunity…a better way.

On a smaller stage, consumers exercise the same behavior in the “Retail World”. They “migrate” between retail channels to find a better answer for their “consumer needs”. Thankfully, it is generally not a matter of survival but rather:

The change can also be the result of technological advances. There is no doubt that computers, the internet and ultimately smart phones have literally changed the environment that we live in and have radically affected consumer behavior.

As I researched this article, I was stunned by the changes in my lifetime.

You get the idea. We’ll take a look at the migration of the U.S. consumer between channels. We won’t go back 50 years – just to 1992. The data is courtesy of the U.S. Census Bureau.

First, let’s look at the whole retail pie, before we see how it is sliced up! The Total U.S. Retail market in 2013 was over $5 Trillion. For this study, I have cut out certain segments which don’t relate to most consumer products, especially Pet Food and Supplies. I have removed Auto Vehicle Dealers and Parts stores, Restaurants and Gas Stations. The result is still huge – $3 Trillion in 2013 and is conducive to more valid comparisons. I also put in a line which is adjusted for price changes – up 64.7% since 1992. 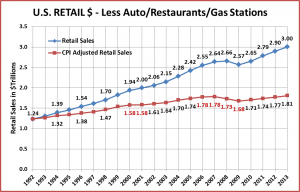 You can see that more than half of the growth comes from increased prices. The buying power of the 2013 Dollar was 60.7% of the 1992 Dollar.

The Adjusted “line” gives a “behind the scenes” picture, especially regarding the major recession. Total Retail sales didn’t drop until 2009. However, you can see that the problem started 2 years earlier when the amount purchased in 2007 was just equal to 2006. Consumers actually started buying less in 2008, not 2009.

In terms of recovery, the “real” recovery didn’t occur until 2013, when we finally got back to the level of purchases made in 2006 and 2007. This took 6 years…not 2 years, which is the time frame for full retail $.

We also had a flat spot in 2001, when price adjusted sales just matched 2000. Thankfully, sales started a slow rise again in 2002.

Now that we have the overall picture, let’s take a look at the individual channels.

The chart below shows 10 key channels and their share of the U.S. Retail Market in 1992, 2002 and 2013. The data is available annually but we have pared it down to make it a little more digestible and still show any migrating trends.

Note: Channels can actually increase sales but lose market share because they are not keeping up with the overall marketplace. Share seems to be the best way to look at the competition for the U.S. Retail $. 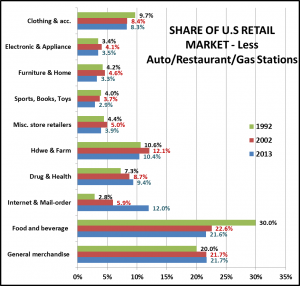 There will be observations about each of the channels in the chart. However, consider the top 3…

Now let’s look at the trends in the individual channels. 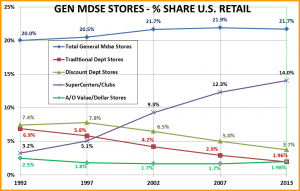 Overall – This channel has only 1 success story. SuperCenter/Clubs gained 10.8 points in market share since 1992. The other segments are down 9.1 pts. The Value/Dollar Stores have turned upward since 2007…but overall the net gain in the channel is only 1.7 pts in market share.

Like the natural world, the U.S. Retail market is a complex environment with every retailer competing for the same nourishment – the consumer $. Here is a brief summary of our analysis of the migration of the consumer within the U.S. retail market over the past 20+ years and the current situation.

The biggest channels are:

The ranking may change but these should remain the top 3 for the foreseeable future.

In terms of retail segments, the big consumer winners since 1992 are:

The “small” winners, at least in the current market, are listed below. With the exception of Drug Stores, the others are usually the only positive segment in channels which are trending down.

Up and then down – Hot product categories generated a “wealth” of “big box” specialty stores in Electronics, Media, Books, Office, Toys, Home, Pet… Technological changes and the allure of Super Centers and the internet have lessened their consumer appeal and in some cases virtually killed these outlets. Big Box Retailers require high levels of consumer store traffic to prosper…or even to survive.

Admittedly, this is a somewhat oversimplified view. There are still individual losers in winning segments and winning retailers in fading segments. We can identify the trends but it comes down to how well the retailer fulfills the consumers’ needs – Value, Convenience and Selection. The great recession has caused Value to come to the forefront. At the same time, technological changes – the internet and smart phones – have made the consumers more knowledgeable and given them a new shopping option.

Sometimes the consumer migration between channels has an even larger impact on society. Consider:

Consumer migration is ongoing and always evolving. Retailers must recognize the “drivers” and be prepared to adapt to better meet consumer needs.

In our next post: we’ll look at the retail migration of U.S. Pet Parents.