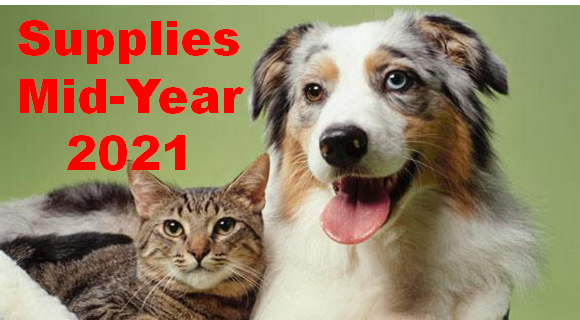 In our analysis of Pet Food spending, we saw that spending plummeted in the 1st half of 2021 compared to the panic buying at the beginning of the pandemic. Supplies took the opposite route. At the beginning of 2020, Supplies Spending was down due to Tarifflation. The pandemic caused consumers to focus on needs so Supplies $ continued its steady decline from its 2018 peak reaching a low point below 2016. In 2021, that all changed. Supplies Prices had been steadily deflating and Consumers finally responded. Mid-Year 2021 Pet Supplies spending was $17.42B, up $1.14B (+7.0%). The following chart should put the recent spending history of this segment into better perspective.

We should note that while the overall lift was relatively low, the lift in the 1st half of 2021 was the biggest YOY 6 month increase in history. Like Pet Food, Pet Supplies spending has been on a roller coaster ride, but the driving force is much different. Pet Food is “need” spending and has been powered by a succession of “must have” trends and the emotional response to the Pandemic. Supplies spending is largely discretionary, so it has been impacted by 2 primary factors. The first is spending in other major segments. When consumers ramp up their spending in Pet Food, like upgrading to Super Premium, they often cut back on Supplies. However, it can go both ways. When they value shop for Premium Pet Food, they take some of the saved money and spend it on Supplies. The other factor is price. Before breaking the record in 2022, Pet Supplies prices reached their peak in September of 2009. Then they began deflating and in March 2018 were down -6.7% from 2009. Price inflation in this segment can retard sales, usually by reducing the frequency of purchase. On the other hand, price deflation generally drives Supplies spending up. Innovation can “trump” both of these influencers. If a new “must have” product is created, something that significantly improves the pet parenting experience, then consumers will spend their money. Unfortunately, we haven’t seen much significant innovation in the Supplies segment recently.

In the first half of 2018 Pet Food spending slowed to +$0.25B. Supplies’ prices switched from deflation to inflation but were only up 0.1% versus the first half of 2017. During this period Supplies Spending increased by $1.23B. Prices began to climb in the second half of 2018 due to impending new tariffs in September. By June 2019 they were 3.4% higher than 2018. The impact of the tariffs on the Supplies segment was very clear. Spending became flat in the second half of 2018, then took a nosedive in the 1st half of 2019, -$2.09B. Prices stayed high for the rest of 2019 and spending fell an additional -$0.9B. In 2020 prices turned up again through March before plummeting, -3.8% by June. However, due to the pandemic focus on “needs”, spending dropped an additional -$0.54B. The situation not only didn’t change in the 2nd half, it worsened as the $ fell an additional -$1.12B. However, 2021 brought a new beginning as Supplies spending increased +$2.26B over the 1st half of 2020 and reached a level above pre-pandemic yearend 2019.

Let’s take a closer look at the data, starting with two of the most popular demographic measures – age and income. The graphs that follow will show both the current and previous 12 months $ as well as 2020 yearend. This will allow you to track the spending changes between halves.

Here’s how you get the change for each half using the $70K>100K group as an example:

Now let’s look at what happened in Supplies spending at the start of 2021 across the whole range of demographics. In our final chart we will list the biggest $ moves, up and down by individual segments in 12 demographic categories.

Since the Great Recession the Supplies segment has become commoditized and very sensitive to inflation/deflation. Plus, since most categories are discretionary, Supplies spending can be affected by spending changes in other segments as Pet Parents trade $. In 2018, the Pet Industry was introduced  to a new “game changer” – outside influence. The FDA warning on grain free dog food caused a big decrease in food spending but the government also radically increased tariffs which drove Supplies prices up and spending down, a record $2.98B.

However, we weren’t done yet. That brought us to 2020 and a new, totally unexpected outside influence, the COVID pandemic. This affected all facets of society, including the Pet Industry. Consumers, including Pet Parents, focused on needs rather than wants. In the Pet Industry, this meant that their attention was drawn to Food and Veterinary Services. This led to a huge lift in Pet Food $ due to binge buying but also a big increase in Veterinary spending. The more discretionary segments, Supplies and Services, suffered. Services had an extra handicap. Many outlets were not considered essential, so they were subject to restrictions and closures. Supplies were still available, but many were considered optional by consumers so spending continued to decline throughout 2020. By yearend, $ had reached the lowest level since 2015. This all happened while prices continued to deflate. That brought us to 2021. The retail economy had largely recovered and spending patterns were returning to “normal”. This was also true in Pet Supplies. Pet Parents opened their wallets and  bought the Pet Supplies that they had been holding back on for a year. The result was the biggest YOY 6 month increase in history. We don’t know what the 2nd half will bring but Pet Supplies are back!

SuperZoo 2022 – Its a great opportunity but You Need a Plan!