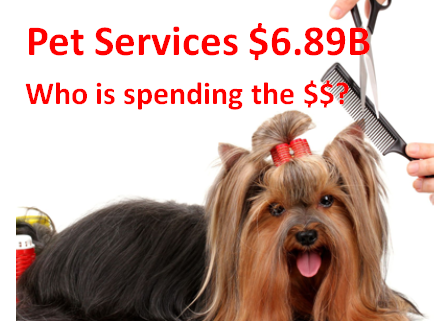 Next, we will look at Pet Services. It is by far the smallest Segment and after a $1.73B, 20.1% decrease, it got a lot smaller and returned to the level of 2016 – 2017. After the great recession, Services’ annual spending slowly but steadily increased. During this time, the number of outlets offering Services strongly grew as brick ‘n mortar retailers looked for a way to combat the growing influence of online outlets. After all, you can certainly buy products, but you can’t get your dog groomed on the Internet. This created a highly price competitive market for Pet Services. In 2017 there was a slight increase in visit frequency, but Pet Parents just paid less. This resulted in a 1.0% decrease in Services spending. In 2018 consumer behavior changed as a significant number decided to take advantage of the increased availability and convenience of Pet Services and spending literally took off, +$1.95B (+28.9%), by far the biggest increase in history. In 2019 Pet Parents, especially the younger ones, value shopped, and spending turned down $0.10B. That brought us to 2020 and the onset of the pandemic. Because Services outlets were often deemed nonessential, they were subject to restrictions and closures. This drove the huge drop in spending.

We’ve seen that the pandemic caused binge buying in Food, while it slowed the more discretionary Supplies segment. Services  spending is arguably the most discretionary of any Pet Expenditure. Let’s look deeper into 2020 demographics.

Let’s start by identifying the groups most responsible for the bulk of Services spending in 2020 and the $1.73B decrease. The first chart details the biggest Pet Services spenders for each of 10 demographic categories. It shows their share of CU’s, share of Services spending and their spending performance (Share of spending/share of CU’s). In order to better target the bulk of the spending we had to alter the groups in two categories – education and area. The performance level should also be noted as 5 of 10 groups have a performance level above 120%. This is the same as Supplies and Total Pet but less than the 6 for Veterinary and far less than the 8 for Food. Last year they also had only 5 over 120%, down from their peak of 7 in 2018. This indicates that there continues to be a little less disparity between the best and worst performing segments in 2020. Although performance is down from 2019, Income is still the biggest factor in Services Spending. The categories are presented in the order that reflects their share of Total Pet $ which highlights the differences of the 8 matching groups. One big difference is that higher education is a much bigger factor in Services $.

We changed 2 of the groups for Services – Education and Area, to better target the biggest spenders. We should also note that Income is still more important to spending in Services than in any other segment but # Earners was the only income related category to gain in importance. Marriage also grew in importance but spending became a little more balanced in most categories with gains by renters and larger CUs.

Most of the best and worst performers are not a surprise. There are 7 that are different from 2019 – 3 of the best and 4 of the worst, the same as last year. The 3 new winners are more family oriented. The high income Gen Xers, including 45>54 yr-olds stayed on top but you can see a move away from the oldest Americans. 75+ yr-olds, those Born before 1946 and No Earner, singles all moved to the bottom. Changes from 2019 are “boxed”. We should note:

In Pet Services spending performance, income is still the major factor. After the youth movement in 2018, spending skewed towards older groups in 2019. This was reversed in 2020 as the younger groups basically held their ground while the older CUs drove the big decrease.

The pandemic closures and restrictions drove Pet Services Spending down $1.73B. In this chart you immediately see a difference from last year. In 2020 there were 3 categories in which all segments spent less on Services. In 2019, there were none. In 2019 the changes by the winner and loser tended to cancel the other out. In 2020, the changes by the losers were radically larger than the winners. The tumult that began in 2019 continued in 2020. Again, there were only 2 repeats and 8 of 24 segments switched from first to last or vice versa. In 2019 there were 9 flips. Here are the specifics:

We’ve seen the winners and losers in terms of change in Services Spending $ for 12 Demographic Categories. Income still matters and the younger groups, especially those with children have come to the forefront. Spending has become more balanced but for the wrong reasons. Here’s some data which shows the monumental change from the 2018 peak.

We found the winners in performance and $, but there were others who performed well but didn’t win. They deserve…. 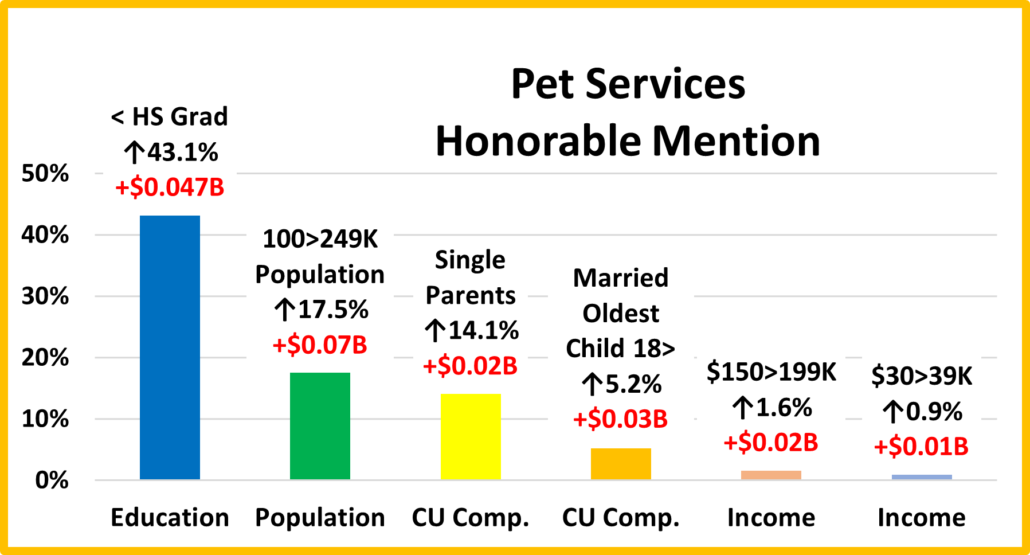 As you see on the chart, sometimes we had to include both 2nd and the 3rd place finishers to reach our 6 positive segment goal. Higher income is important, but the results were mixed in 2020. The $50>69K group won but there were also positive performances by the $150>199K and $30>39K groups. In a reversal from last year, CUs with kids spent more unless you were married and your oldest child was under 6. This also included single parents. The only area spending increase came from Rural areas but urban areas with a population of 100>249K also posted an increase. A College Degree is more important in Services Spending than in any other industry segment. In 2020 those with only a High School diploma and those who didn’t finish high school were the only 2 education segments to spend more on Services. Only 21% of all demographic segments spent more on Services so our choices for Honorable Mention were limited.

For years, Services’ spending slowly but steadily increased. However, the number of outlets offering Services was radically increasing. In 2017, this competitive pressure caused Pet Parents to shop for value and spending fell 1%. In 2018, the abundance of outlets and competitive prices finally had their intended impact. Many more consumers took advantage of the convenience of Pet Services and spending literally took off. In 2019 Consumers held their ground at the new higher level but we saw turmoil similar to 2017. Again, value shopping likely contributed to the small decrease.

2020 brought the pandemic and Services outlets were often deemed nonessential so they were subject to restrictions and closures. Services are definitely needed by some groups. However, for most demographics, Services are a convenience and spending is very discretionary in nature. The reduced availability and the pandemic driven focus on the “needed” segments – Food and Veterinary caused a 20% drop in Services $. High Income is still important in Services spending, but we saw mixed results in 2020. However, the $70K> group still has its highest performance in Services.

Performance is an important measurement. There were 5 categories with high performing big groups, the same as 2019. This is equal to Supplies, but less than Veterinary (6) & Food (8). This indicates a little less disparity in Services Spending.

The Housing category dropped out and was replaced by # of Earners. These changes were caused by the spending again skewing a little younger. The younger crowd is more likely to have all adults in the CU working. They also are more like to rent than own their home. Renters had the only increase in the Housing segment and pushed Homeownership below the 120% marker. While Spending did move a little younger, Gen X and Boomers are still the top 2 spenders.

A radical increase in the number of outlets caused a competitive market which broadened the appeal of Services and drove a record increase in 2018. Value shopping caused a small decrease in 2019 but Services stayed at the new “normal” level. The pandemic changed all that. Outlets closed and people stayed home so DIY became the new trend even in Pet Services. Services did become more demographically balanced, but it was due to the huge drop in spending by those who normally spent the most, not by any big increases. As Retail America recovers from the 2020 pandemic, we assume that many services outlets will re-open. However, to get back to the previous high level of spending, Pet Parents will also have to move away from DIY and back to “I need help with my pet children, and I have the money to pay for it.” Services were hit the hardest by the pandemic in 2020. We’ll see what happens in 2021.

At Last – The “Ultimate” Pet Services Spending Consumer Unit consists of 4 people – a married couple with 2 kids. The oldest child is 6>17. They are White, but not of Hispanic origin. At least one of them has an advanced College Degree. They are 45 to 54 years old and both work in their own business which generates an income of over $200K. They live in a large suburb of a metropolitan area of 2.5>5 MM in the Western U.S. and are still paying off their mortgage.