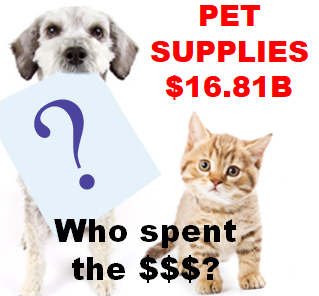 Next, we’ll turn our attention to Pets and Supplies. We’ll see some differences from Pet Food as the spending in the Supplies segment is more discretionary in nature. There are other factors too. Spending can be affected by the spending behavior in other segments, especially Food. Consumers often trade $ between segments. However, the biggest factor is price. Many supplies categories have become commoditized so pricing changes (CPI) can strongly impact Consumers’ buying behavior in this segment. In the 2nd half of 2016, deflation began, and Supplies started a 24 month spending lift, totaling $4.97B. Then prices turned up in mid-2018 due to impending new tariffs. Spending fell -$0.01B in the 2nd half but the tariffs really hit home in 2019. 93 of 96 demographic segments spent less and Supplies $ fell a record -$2.98B.

The biggest spending groups for Pet Supplies are the same as Total Pet and Food. However, the discretionary nature of Supplies causes spending to be more impacted by income than Food. Groups associated with higher income, like Education and # Earners, perform better than in Food. Homeowners, Married and Whites, the biggest spenders, had the biggest drops in Supplies $. Also, 7 groups with 120+% performance indicates greater disparity between segments.

Almost all of the best and worst performers are those that we would expect. In Pet Supplies spending, there are 5 that are different from 2018. That is the same as Total Pet but 2 fewer than Pet Food. It is actually the lowest number for any Industry segment. As we move deeper into the data, we will start to see even more differences between the Industry Segments. Changes from 2018 are “boxed”. We should note:

It’s time to “Show you the money”. Here are segments with the biggest $ changes in Pet Supplies Spending.

In 2019 Supplies Spending was down $2.98B. The decline began in the second half of 2018 as spending turned down slightly. Then the full impact of the tariffs hit home and the $ plummeted. In the chart, there are 2 repeats from 2018 – 1 winner and 1 loser. 9 segments switched from last to first or vice versa. This is much greater turmoil than in the Food Segment. Almost all winners were a surprise. However, the biggest surprise or change from recent history was that in 2019, every segment in 9 of 12 Demographic Categories decreased spending on Supplies. In 2018, in 3 categories every segment increased spending and in 2017 this was true for 10 categories. This provides perhaps the biggest indication of the massive impact of tarifflation on the Supplies Segment. Here are the specifics:

We’ve now seen the winners and losers in terms of increase/decrease in Pet Supplies Spending $ for 12 Demographic Categories. In 2019, spending fell a record -$2.98B due to tarifflation. Only 3 of 96 segments had increases and 9 of 12 categories had no segments that spent more on Supplies. In performance, we saw many expected winners, but it was a different story in $ change. Most of the 2019 winners were those that had the least to lose from 2018. However, like previous years, not every good performer can be “the” winner and some of these “hidden” segments should be recognized for their performance, which was “bad”, but better than most. They don’t win an award, but they deserve… 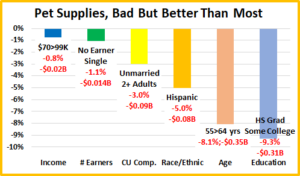 The numbers from these segments are not good but merit some recognition in such a devastatingly bad year. Like many of the winners, most are unusual and a very eclectic mix. The $70>99K middle income group was only down 0.8% so their decrease was truly minimal. No Earner, Singles was literally only $1M away from winning the # of Earners category. The best performances generally came from “no kids” CUs like those consisting of 2+ Unmarried Adults. The lower income Hispanics finished 2nd with only a 5% decrease because their focus was primarily on more essential supplies. The 55>64 yr old Baby Boomers have the largest share of Supplies $ of any age group and their % decrease was about half of the national number. HS Grads with some College were the only other group besides those with no HS Diploma to have a % decrease less than double digits. 2018 was not a great year but it was still pretty good as 72 of 92 Demographic Segments spent more. In a marked contrast, 2019 was nearly universally bad as 93 of 96 demographic segments spent less on Supplies.

While Pet Food spending has shown a definite pattern, Pet Supplies have been on a roller coaster ride since 2009. Many Supplies categories have become commoditized and react strongly to changes in the CPI. Prices go up and spending goes down…and vice versa. Supplies spending has also been reactive to big spending changes in Food. Consumers spend more to upgrade their Food, so they spend less on Supplies – trading dollars. We saw this in 2015. In 2016 the situation reversed. Consumers value shopped for Food and spent some of the “saved” money on Supplies.

That brought us to 2017. Both Supplies and Food prices deflated while the inflation rate in both of the Services segments dropped to lows not seen in recent years. Value was the “word” and it was available across the market. Perhaps the biggest impact was that the upgrade to super premium Food significantly penetrated the market. This could have negatively impacted Supplies Spending, but it didn’t. Supplies’ spending increased in 93% of all demographic segments.

2018 started out as expected with a $1B increase in Supplies and a small lift in Food. Then the government got involved. In July the FDA issued a warning on grain free dog food and spending dropped over $2B. New tariffs were implemented on Supplies and spending flattened out then turned down $0.01B in the 2nd half. Because of shipping timing, the full retail impact of Tariffs was delayed until 2019 when spending fell -$2.98B, affecting 97% of all demographic segments.

Among the demographic categories in which a consumer has some control, Higher Income, Marriage, Homeownership and Higher Education are still the biggest factors in Supplies spending. In 2019 Income stayed on top and two categories directly associated with income – Occupation and # of Earners increased in importance.

Increased Tariffs increased prices which obviously severely impacted Supplies Spending. Those that spent the most in 2018 were often the most negatively affected in 2019. A prime example of this is that 6 of the 12 segments with the biggest increase in 2018 flipped to having the biggest decrease in 2019. In terms of performance, 10 of the 12 best performing segments repeated in 2019. There has always been a big gap in performance between the best and worst performers in Supplies. It’s still there as It narrowed only 0.6% from 2018 to 2019.

It appears the 2019 decrease most affected the groups that spent the most money on the more discretionary supplies categories. It will be interesting to see the impact of the COVID-19 pandemic on Supplies $pending Demographics.

Finally – The “Ultimate” Pet Supplies Spending CU consists of 3 people – a married couple, with 1 child, over 18. They are 45>54 yrs old. They are White, but not of Hispanic origin. At least one has a BA/BS Degree. Both of them work, running their own business and their child just started a part time, after school job. They’re doing well with an income over $200K. They live in a small suburb, adjacent to a big city in the Western U.S. and are still paying off the mortgage.