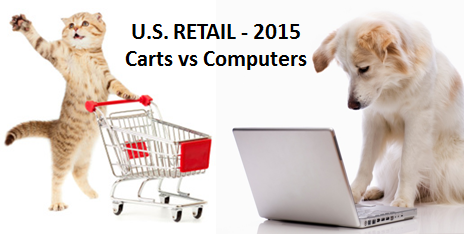 How much is the U.S. Retail business up through June? Yes, the question is not if…but how much? Since 1992 only 2009 generated a decline over the previous year in the first half and in the annual numbers. Here is another question…which part of the Retail Market is most relevant to our industry?  Take a look:

Before we look at individual channels, let’s look at recent overall 1st half performance: 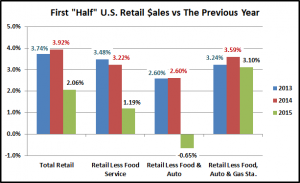 Regardless of how you look at it, the first half of 2015 was not as robust as the past two years. In the “best” case in the graph, the rate of relevant U.S. Retail growth is 14% less than in 2014. However, the graph does give us a benchmark to measure the performance of specific retail segments. If their growth exceeds 3.1%, then they are gaining market share. If it is less than 3.1%, they are losing market share…even if sales are up! Let’s look at how the major retail segments are doing. 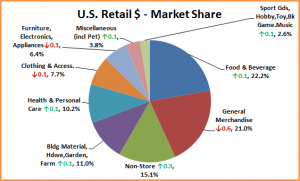 These are large slices of the U.S. Retail pie. Three divisions – General Merchandise Stores, Food and Beverage and Non-Store account for 58.3% of the total market. If you look back at our post on the channel migration of Pet Products Sales, you will see that in the 2012 these divisions produced 59.7% of total Pet Products sales. Consumers spend a lot of money in Pet Specialty Stores but Pet Products are also “on the shopping list” in the outlets where they spend most of their money.

Major Divisions of the market generally don’t show much movement in market share in just one year so the change in the General Merchandise Stores and Non-Store “Divisions” is very significant. Each of the major divisions includes a number of subsegments. General Merchandise includes Traditional Department Stores, Discount Department Stores, Supercenters and Clubs as well as $ and Value Stores. These specific retail channels often have far greater movement in share because this is the level that the consumer “views” in making their initial shopping choice.

Enough “overview”! Let’s look at the first half performance of some of the specifically “Pet Relevant” Channels to see which are doing the best…and worst in gaining consumer spending. We will use 2 separate graphs to illustrate the situation in these 12 Channels. The first will show the % change in sales in 2015 vs 2014. The next will “show us the money” by translating the % into $ gained or lost.

Then we will wrap it up with some observations by channel.

This first graph shows the percentage change in the first 6 months sales of 2015 versus the same period in 2014. Remember, we determined the “norm” to be an increase of 3.1% 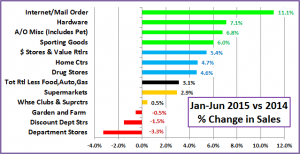 The leader is no surprise. It just reinforces what we all “thought”. Now, as promised, I’ll “show you the money!” For a reference, the Total increase from all Retail Channels –Food, Auto & Gas was $45B 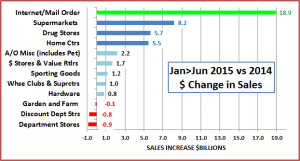 The growth in the Internet is even more pronounced when you look at the change in $ spent!

Now let’s wrap it up with a brief summary…and provide you with the detailed data for future reference.

There is no change at the top. Supermarkets remain the largest Retail Channel, followed by SuperCenters & Club Stores. The Internet/Mailorder segment is growing even faster than anticipated. Gaining 0.9% in Market Share in a $3T annual market in 1 year is definitely fast. However, this is just the first half. We’ll see if this Channel can maintain this pace for the whole year. If the current trends do continue, Internet/Mailorder could take over the #2 position in the U.S. Retail economy in as little as 2 years. You also have to wonder what will happen when the internet turns its attention to grocery items.

There are other notable points that relate to the Pet Industry  – the continued growth of the $/Value Stores and the unexpected strength in the A/O Miscellaneous Channel.

Bottom Line: The U.S. Retail Market is evolving as the consumer migrates to the channels which best fulfill their current wants and needs. To survive and prosper, you must identify those needs and adapt.

Here are the details: 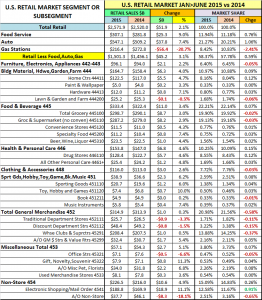