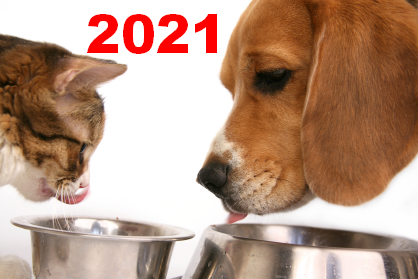 After the pandemic turmoil in 2020, there was a strong recovery in 2021. Total Pet spending had a record increase and reached $99.98B, up $16.23B (+19.4%). Food spending fell after the record “panic” increase in 2020 but the other essential segment, Veterinary had record growth. The discretionary segments – Supplies & Services were hit hard by the pandemic. In 2021, Pet Parents gave them the attention they deserve…and a lot more. Here are the specifics:

The industry truly is a “sum” of its integral segments, and each segment has very specific and often very different buying behavior from the many consumer demographic segments. For this reason, we’re going to analyze each of the industry segments first. This will put the final analysis of Total Pet’s Record Spending into better perspective. Note: The numbers in this report come from or are calculated by using data from the current and past US BLS Consumer Expenditure Surveys. In 2021, this was gathered by the U.S. Census Bureau from over 42,000 interviews and spending diaries. The final data was then compiled and published by the US BLS.

We will start with the largest Segment, Pet Food (and Treats). In 2021 Pet Food Spending totaled $34.41B in the U.S., a $2.44B (-6.6%) decrease from 2020. The current trend in high priced, super premium foods magnifies the results of any changes in consumer purchasing behavior. In earlier research we discovered a distinct, long-term pattern in Pet Food Spending. In 2018 we broke the pattern due to outside influences – 1st the FDA warning, then with COVID in 2020. Here is Pet Food Spending since 1997 in full Retail Dollars and adjusted for inflation.

The pattern began in 1997. Retail Pet Food Spending increases for 2 consecutive years then reaches a plateau year or even drops. There was a notable exception in the period from 2006 to 2010. During this time, there were two traumas which directly impacted the Pet Food Retail market. The first was the Melamine recall, which resulted in radically increased prices as consumers insisted on made in USA products with all USA ingredients. The second affected everyone – the great Recession in 2009. This was the first time that annual U.S. retail spending had declined since 1956. The net result was that the plateau period was extended to include both 2009 and 2010.

For 20 years, Pet Food was driven by short term trends. A new food trend catches the consumers’ attention and grows …for 2 years. Then sales plateau or even drop…and move to the next “must have”. After 2014, the changes  became more pronounced and the situation got more complicated due to a number of factors starting with the move to high priced super premium foods, but including increased competition, especially from the internet, and behavioral changes, like increased value shopping. In 2018, outside influences came into prominence. The first was the FDA warning on Grain Free dog food. This caused many Pet Parents to back away from certain foods. When the warning was determined to be bogus, the Food segment began recovery. Then came COVID. Fear of possible shortages caused certain groups to binge buy food. Now, that’s over. With the spending dip in 2021 after 2 years of increases, perhaps the spending pattern is back on track. Now, let’s take a closer look at spending since 2014.

2014 marks the beginning of the Super Premium era. It began in the 2nd half of 2014 with the 25>34-year-old Millennials making the 1st move. In 2015 the Baby Boomers got on board in a big way, producing a $5.42B increase in spending, the biggest lift in history at the time. 2016 saw a spending change that was accelerated by the high prices of Super Premium Pet Foods. After consumers upgraded to a more expensive pet food, their #1 priority became, “Where can I buy it for less?” Value Shopping on the internet was a major contributing factor in the big spending drop in 2016.

2017 was an up year which should have been due to a “must have” trend. However, a closer look at the data showed that the $4B increase in Pet Food spending in 2017 came not from a new trend but from a deeper demographic penetration of Super Premium foods. Value shopping in a highly competitive market, especially on the internet had made Super Premium pet foods more accessible to a broad swath of consumers.

Like Pet Food, human behavior has changed over the years in regard to our pets. In the 90’s, Pet Owners became Pet Parents. Then, after 2000 we began truly humanizing our pets which is very accurately reflected in the evolution of Pet Food. We became more focused on fulfilling the health needs of our pets, beginning with the first move to premium foods in 2004. This radically increased after the Melamine scare in 2007. Now consumers read pet food labels, research ingredients and expect their pet foods to meet the same quality standards as the best human foods. This was very evident in 2018. It should have been a year of increased spending but the consumers’ reaction to the FDA grain free warning threw the pattern out the window. In 2019 the warning lost credibility. Pet Food spending stabilized in the 1st half of the year and then grew by $2.3B in the 2nd  half. Some Pet Parents began to return to the topline Super Premium Foods while others opted for even more expensive varieties. Also, new groups got on board the Super Premium Express.

After the 2019 recovery came the pandemic of 2020. There is nothing more necessary to a Pet Parent than pet food. This spurred binge buying, especially in the 1st half of the year and drove the biggest annual spending increase in history. However, binge buying doesn’t increase usage, so spending has fallen in 2021. Another factor was the ongoing strong search for value & convenience which drove many consumers online. Consumers spent less per purchase which reflects the end of the binge as well as their search for value. There were 1.5% more CUs and they bought more frequently. The increase in frequency came from more regularly scheduled deliveries but some pet parents also downsized their purchases to lower the price. When you put all these factors together, the small drop in spending is not a surprise.

The growth of Pet Food spending since 2014 reflects the rise of Super Premium but also another trend – the spectacular increase in the number and use of Pet Medications and Supplements, which are often produced in the form of treats. Together, the strength of Pet Food and these product subcategories reflect the Pet Parents’ absolute number 1 current Concern – the health, wellbeing and safety of their Pet Children, which starts with the quality of their food.

Before we get into the details for 2021, we should note the uniqueness of 2017. With competitive pricing on Super Premium Foods and the consumers’ commitment to pet health, 2017 was the only year since 2015 with spending growth in every major income group. Since then, we have seen the major impact on various groups by outside influences. In mid-2018 it was the FDA grain free warning and in 2020 it was the pandemic.

In 2020 the 55>64 yr old Boomers binge bought Pet Food. As a result, in 2021 they had a big drop in spending, which was the only decrease by any age group. The Pandemic caused more Pet Parents to focus on the health & wellbeing of their Pet Children. The result is that there is an even broader commitment to high quality, Super Premium Pet Food.

We going to drill deeper, but a little differently than we normally do. The pandemic had a major impact on Pet Food, with the 2020 binge buying by some groups followed by an inevitable big drop in 2021. We have noted that despite the decrease in 2021 $, the average growth rate from 2019>21 was 5.0%, just about equal to the 5.3% rate from 2014>19. We will identify the segments with the biggest change from pre-pandemic 2019 to post-pandemic 2021.

The first thing that you notice is that the biggest increases are radically larger than the biggest decreases. That’s always a good indication of progress. Also, we should note that whether you rent or own your home, you spent more on Pet Food after the pandemic than you did before.

About half of the winners are the “usual suspects”:

However, some are surprises:

These winners indicate another impact of the pandemic. We focused on home and family, including our Pet Children. Our #1 pet concern became their health & wellbeing. Even low-income groups committed to high quality pet food.

Among the “losers”, you see some of the groups that binge bought Pet Food in 2020 in fear that it might become unavailable:

Each of these groups increased 2020 Pet Food Spending by an average of $7.7B, +118% over 2019. Panic, Binge buying of Pet Food doesn’t get repeated and it doesn’t increase usage. It only increases your backup stock. When you think of the situation, it’s amazing that they got back to a spending level in 2021 relatively close to that of 2019.

The pandemic was a traumatic event for everyone. However, the Pet Food segment has essentially returned to the strong growth rate that it’s had since 2014. Now, we just need a hot new trend to further “fuel the growth fire”.