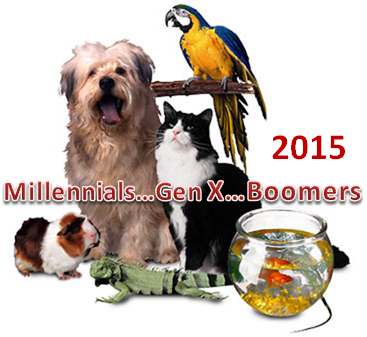 In our recent posts, we have started to look at the key demographics behind “who” is spending the money. By looking deeper, all of the industry participants can better target their products and marketing efforts to maintain and gain retail sales…to keep the industry strong and growing.

In terms of demographics, nothing has a higher profile in the media and in our minds than comparing the actions between generations. How do the Millennials compare to the Baby Boomers? What about Generation X? These are valid questions and the Generation Demographic is the one measure that defines a very specific group of individuals for a lifetime. Emigration, immigration or death can change the mix and of course, marriage and divorce will affect the # of households. However, we can still track how aging, technological changes, economic events, in fact any change in society, affects the behavior of a specific set of individuals.

In this report we will compare the Pet Spending in 2015 vs 2014 by Generation. The “numbers” come from or are calculated from data in the US BLS Consumer Expenditure Survey. The Census Bureau handles the field work, gathering info from over 50,000 interviews and diaries. The US BLS then compiles the data into the final reports.

NOTE #1: In this report we use the term Consumer Unit (CU). This is often used interchangeably with Household. They are “close” in meaning. However, a CU indicates independent decision making on living expenditures. You can have more than one CU in a household – boarders, roommates…As a result, there are a few more CUs than H/Hs.

NOTE #2: In March of 2016, Millennials surpassed Baby Boomers in the number of individuals. However, this report deals with Financially Independent Consumer Units. The Millennials still have a lot of ground to make up!

Let’s get started by defining the generations….

…and then looking at their share of the Total U.S. CU’s: 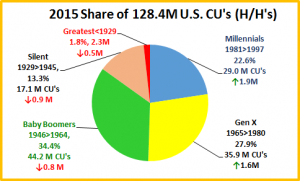 Now let’s get to know the Generations a little better by looking at some key CU Characteristics.

Next we’ll compare them to the National Ave in Income, Spending, Pet Spending and Pet Share of Total $pending

It’s time to look at actual Dollars Spent. We’ll review the Generational spending on Total Pet and each industry segment in terms of share of sales as well as the 2015 performance compared to 2014 starting with Total Pet…

2015 Increase driven by Baby Boomers with a little help from Gen X and Silents (Ages 35-70) Now on to Supplies..

Comment: CU spending was down in every group. The only “lift” was due to more Millennial CU’s.  The trend was so pervasive that we can’t blame the increase in Food spending. We’ll see what happens in 2016. Next, Services…

The increase was completely driven by the Gen Xers and Millennials as they opted for the convenience that Pet Services brought to their hectic lives. The Over 50 crowd was down…slightly. The final segment is Veterinary…

Gen X, Millennials and the Silents all had strong increases, but they couldn’t overcome the $2.2B drop in Boomers’ spending. It appears that the Veterinary segment paid a price for the Boomers’ decision to upgrade their Pet Food.

The Greatest Generation – They aren’t called the “Greatest” for no reason. They literally helped change the world. However, with their youngest member now 87 years old, their time as Pet Parents is inexorably coming to an end.

The Silent Generation – At 70+ years old, their lifetime commitment to their companion animals remains strong. This is immediately apparent when one sees their $1 billion dollar increase in Veterinary spending and the fact that they spend over 1% of their total expenditures on their pets – second only to the Baby Boomers.

Baby Boomers – They have been the consumer group most responsible for the spectacular growth of the Pet Industry. They were the first “Pet Parents” and that commitment remains as strong today as it was over 30 years ago. They are the leading spenders in every segment, especially those most associated with the wellbeing of our companion animals – Food and Veterinary. Even today, they are still making the informed, expensive decisions to do what is best for their pet family. In 2015 they made the choice to “upgrade” their Pet Food. The cost…over $5B. Admittedly, their spending in other segments suffered somewhat, but may already be bouncing back. Amazing!

Gen X – They currently make and spend the most money overall and their Pet Spending per CU is close to or above the national average in all segments. The next five years will be critical. Their children will begin to “leave the nest”, which usually results in additional focus and spending on their pet family, which is still at home. We’ll see.

Millennials – Their every move is subject to speculation. Everyone is concerned about the future and there is no doubt that they are the future. We tend to lump all Millennials together. However, life, including spending behavior, progresses in stages. A large percentage of this group is still in the earliest stages of “building” their lives. We need to provide them with the information, support and products to fulfill their wants and needs. Then…be patient. Count on the extraordinary appeal and allure of companion animals. In a phrase, “Bet on Pets!”

I welcome your questions and comments!

Top 3 U.S. Retail Channels…Where did they come from?