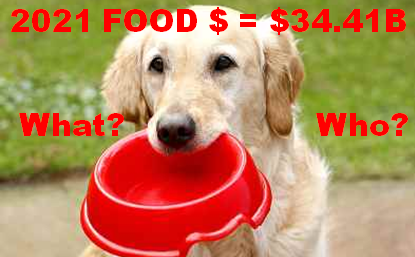 As we continue to drill ever deeper into the demographic Pet spending data from the US BLS, we have now reached the level of individual Industry segments. We will start with Pet Food, the largest and arguably most influential of all. We have previously noted the trendy nature of Pet Food Spending. In 2018 we broke a pattern which began in 1997 – 2 years up then spending goes flat or turns downward for a year. We expected a small increase in 2018 but what we got was a $2.27B decrease (-7.3%). This was due to the reaction to the unexpected FDA warning on grain free dog food. A pattern of 20+ years was broken by 1 statement. The grain free warning lost credibility and spending rebounded in 2019, +$2.35B (+7.1%). In 2020 the market was hit by an even bigger outside influence – the pandemic. The impact varied by segment. In Pet Food, it created a wave of panic buying out of fear of shortages, resulting in a $5.65B (18.1%) lift. The panic buying wasn’t repeated in 2021 resulting in a $2.44B (-6.6%) drop in spending.

First, we’ll see which groups were most responsible for the bulk of Pet Food spending and the $2.44B decrease. The first chart details the biggest pet food spenders for each of 10 demographic categories. It shows their share of CU’s, share of pet Food spending and their spending performance (Share of spending/share of CU’s). 1 group is different from Total Pet – 45>74, as food spending skews slightly older. The categories are presented in the order that reflects their share of Total Pet Spending. There are other differences from Total Pet. First, being Married is more important in Food spending than in Total Pet. Income is the most important factor in both, but the # of earners in a CU matters very little in Pet Food spending. Food spending is also a little more balanced than Total Pet Spending. This is evident in the fact that the Performance of all groups but Homeowners, Married Couples and White, Not Hispanic is significantly lower for Food. Also, Age & # Earners do not reach the 60% targeted market share for Food. In 2020, Pet Food accounted for 70.8% of Pet Products $ and 44.0% of Total Pet. In 2021 the Food share fell to 59.1% in Products and 34.4% of Total Pet. After the Food binge in 2020, Pet Parents caught up on their children’s needs in other industry segments.

Only 1 of the big spenders for Pet Food is different from Total Pet. Last year there were 3 special groups. 2021 brought a return to a more normal spending pattern and spending became slightly more balanced. This is best illustrated by the fact that in 2021 the performance for only 5 groups exceeds 120%. Last year there were 8 groups at $120+%, 5 of which had a performance level above 130+%.

Most of the best and worst performers are the ones that we would expect but 2021 produced one surprise winner – No Earner 2+ CUs, and 1 surprise loser – Suburbs with a population over 2500. There are 10 different winners from 2020 and 5 different losers. This is even more than the total of 10 last year and the 9 new winners this year in Total Pet. This reflects the return to normal after the binge buying in 2020. Changes from 2020 are “boxed”. We should note:

There are no repeats from 2020 so all are new. All 12 losers won last year which shows the impact of the 2020 binge. 5 of the winners were 2020 losers. That means that 71% flipped from 1st to last or vice versa. Half of the winners are expected while most losers are not. The Surprise winners are Retirees, No Earner, 2+CUs, Center City, 75+ and Hispanics. The losers that came as no surprise were HS Grads or less, Homeowners w/o Mtge and the Midwest. The biggest surprise was that spending fell -$2.44B while 65% of all demographic segments spent more. Here are the specifics:

We’ve now seen the “winners” and “losers” in terms of increase/decrease in Pet Food Spending $ for 12 Demographic Categories. In 2020, the big spending lift due to the pandemic occurred in very specific segments. In 2021 those same segments generally had the biggest drops in $. This created an unusual situation. Pet Food spending decreased by -$2.44B while 65% of all demographic segments actually spent more. Most of America remains firmly committed to high quality Pet Food. However, super premium Food comes with high prices, so income is very important in Pet Food spending. The pandemic has accelerated value shopping, especially on the internet. We have identified the winning segments in performance and $ increase but they were not alone. Not every good performer can be a winner. Some “hidden” segments should also be recognized for performance. They don’t win an award, but they get… 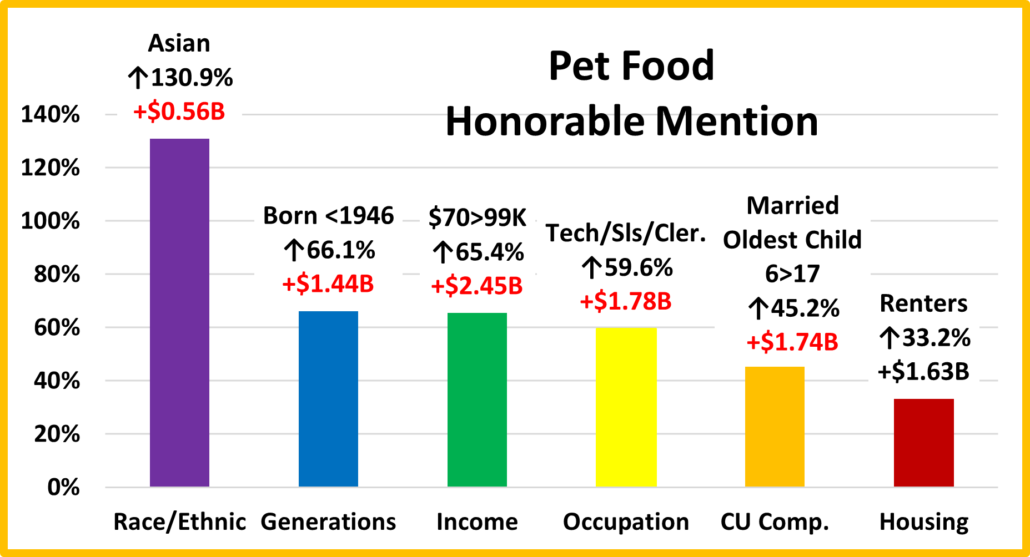 Asians have a low % of pet ownership, but it is undoubtedly growing as their Pet Food $ more than doubled in 2021. The oldest Americans are generally short on $ but they are committed to their Pets. In 2021, many of them likely committed to Super Premium Pet Foods as their spending increased by 66%. The highest income groups had the biggest increase in spending, but “middle America” also opted in. This is evident by the big lifts from $70>99K and lower-level White Collar workers. Gen Xers had a great year and they are the most likely group to have an oldest child between 6 and 17 years old. Homeownership has always been a key factor in Pet Parenting and Pet Spending, but it is not a necessity. This is made very clear by the 33% increase in Pet Food Spending from Renters.

Pet Food has been ruled by trends over the years. The drop in 2018 due to the FDA grain free warning broke a pattern of 2 years up followed by 1 year of flat or declining sales which had been going on since 1997. This trendy nature increased with the first significant move to premium foods in 2004. The Melamine crisis in 2007 intensified the pattern and resulted in a series of “waves” which became a tsunami with the introduction of Super Premium Foods.

The 25 to 34 yr old Millennials were the first to “get on board” with Super Premium in the 2nd  half of 2014. In 2015 a substantial portion of consumers began to upgrade. The result was a $5.4B spending increase. These consumers were generally more educated and had higher incomes. One negative was that they often paid for the upgrade by spending less in other segments. In 2016 the anticipated drop in spending happened. The upgraded group value shopped for their new food and found great deals, especially online. They spent some of the $3B “saved” Food $ in other segments but not enough to make up for the drop in Food. Total Pet Spending was down $0.46B. In 2017 we were ready for a new “wave”. Thanks to a very price competitive market, what we got was a deeper penetration of Super Premium foods. This group of upgraders was mostly middle-income, not college educated and often Blue-collars workers. Most also were in the 55>64 yr-old age group. The result was a $4.6B increase but this time there was no trading $ with other segments.

In 2018 we were “due” a small annual increase in Pet Food. Spending in the 1st half was +$0.25B but then the bottom dropped out as spending fell $2.51B in the 2nd  half in reaction to the FDA warning on grain free dog food. The big decrease in spending came directly from the groups who had fueled the 2017 increase. In fact, 71% of the demographic groups with the biggest change in Pet Food $ switched from first to last or vice versa from their position in 2017.

That brought us to 2019. The impact of the FDA warning faded as there was little evidence to back it up. Pet Parents returned to Super Premium or chose even higher priced options. Supplement $ also grew as the health and wellbeing of their Pet Children remained the #1 priority. Pet Food $ grew $2.35B with 75% of demographic segments spending more. Income and related categories mattered more and Pet Food Spending became a less demographically balanced. In 2020 the Pandemic accelerated this trend. Fear of shortages led to binge buying and a $5.65B increase. This behavior was driven by very specific groups. This spending disparity was manifested in the fact that the performance of 8 of 10 big spending groups exceeded 120% while 49% of all segments spent less.

In 2021, the retail market strongly recovered but the turmoil in Pet Food continued. The 2020 binge buying was unnecessary and didn’t increase usage, so Pet Food spending fell by $2.44B. The 2021 Turmoil exceeded that of 2018 as every segment with the biggest increase in 2020 had the biggest decrease in 2021. The resulting drop in $ hid the fact that 65% of all demographic segments spent more on Pet Food. 2021 was actually a pretty good year for Pet Food.

Finally – 2021’s “Ultimate” Pet Food Spending CU is 2 people – a married couple. They are 45>54 years old and White, but not of Hispanic origin. They both work and at least one has an Advanced College Degree and is a Manager or Professional. They earn $150>$199K but are still paying the mortgage on their house in a small suburb in the West.