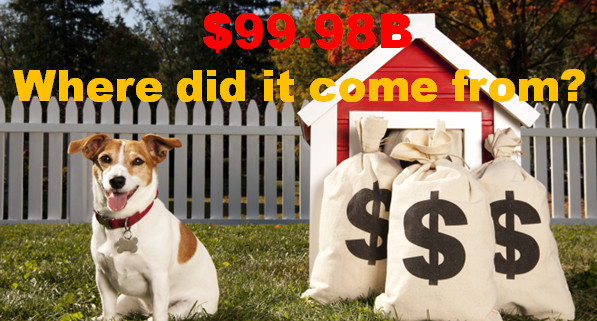 Total Pet Spending in the U.S. was $99.98B in 2021, a $16.23B (19.4%) increase from 2020. These figures and others in this report are calculated from data in the annual Consumer Expenditure Survey conducted by the US BLS. 2020 was a year of pandemic turmoil for the industry. Consumers focused on “needs” which caused a spending lift in Veterinary and binge buying of Food. However, the discretionary segments – Supplies and Services, had big decreases in $. The net was a 6.8% in Pet Spending. 2021 was also tumultuous but it was almost all positive. The Food binge couldn’t be repeated so Food $ fell slightly but all other segments had record increases which produced the biggest Pet spending lift in history. 2021 Pet Spending certainly deserves a closer look.

The first question is, “Who is spending most of the $100 billion dollars?” There are of course multiple answers. We will look at Total Pet Spending in terms of 10 demographic categories. In each category we will identify the group that is responsible for most of the overall spending. Our goal was to find demographic segments in each category that account for 60% or more of the total. To get the finalists, we started with the biggest spending segment then bundled related groups until we reached at or near 60%.

Knowing the specific group within each demographic category that was responsible for generating the bulk of Total Pet $ is the first step in our analysis. Next, we will drill even deeper to show the best and worst performing demographic segments/groups and finally, the segments that generated the biggest dollar gains or losses in 2021.

In the chart that follows, the demographic categories are ranked by Total Pet market share from highest to lowest. We also included their share of total CU’s (Financially Independent Consumer Units) and their performance rating. Performance is their share of market vs their share of CU’s. This is an important number, not just for measuring the impact of a particular demographic group, but also in measuring the importance of the whole demographic category in Spending. All are large groups with a high market share. A performance score of 120+% means that this demographic is extremely important in generating increased Pet Spending. I have highlighted the 5 groups with 120+% performance.

The only group change from 2020 is that College Grads gained 12% in share, reached the 60% threshold and replaced Associates Degree>. There were changes in the numbers and rankings and again only 5 made the 120%+ club. Higher Education (College Grads) moved in while Everyone Works dropped out. All Wage Earners gained 4 points in share and 10 points in performance. While it matters less how many people work, higher income remains the single biggest factor and continues to grow in importance in Total Pet Spending.

Total Pet Spending is a sum of the spending in all four industry segments. The “big demographic spenders” listed above are determined by the total pet numbers. The share of spending and performance of these groups varies between segments and in a few cases falls below 60%. We also altered the groups in some segments to better reflect where most of the business is coming from. The pandemic and this year’s recovery caused some turmoil in Pet Spending,

The group performance is a very important measurement. Any group that exceeds 120% indicates an increased concentration of the business which makes it easier for marketing to target the big spenders. Income over $70K is again the clear winner, but there are other strong performers. High performance also indicates the presence of segments within these categories that are seriously underperforming. These can be identified and targeted for improvement. However, 2021 is a little more complicated. Many of the big drops in spending came from segments that binge bought Pet Food in 2020. These big emotional moves, up or down can affect the total group performance. Normal may return in 2022.

Most of the best and worst performers are just who we would expect but there are 9 winners that are different from 2020. This also indicates a move back towards “normalcy”. Changes from 2020 are “boxed”. We should note:

The “new” and old winners reflect both the move back towards more normal spending patterns and slightly younger CUs. In the next section we’ll look at the segments who literally made the biggest difference in spending in 2021.

We’ll “Show you the money”! This chart details the biggest $ changes in spending from 2020.

An unbelievable amount of turmoil. There are 24 Winners and Losers. Only 1 segment held its spot from 2020 while 17 switched from winner to loser or vice versa. In 7 categories both flipped. Overall, 96% were different from 2020.

We’ve seen the best overall performers and the “winners” and “losers” in terms of increase/decrease in Total Pet Spending $ for 12 Demographic Categories. Now, here are some segments that didn’t win an award, but they deserve…. 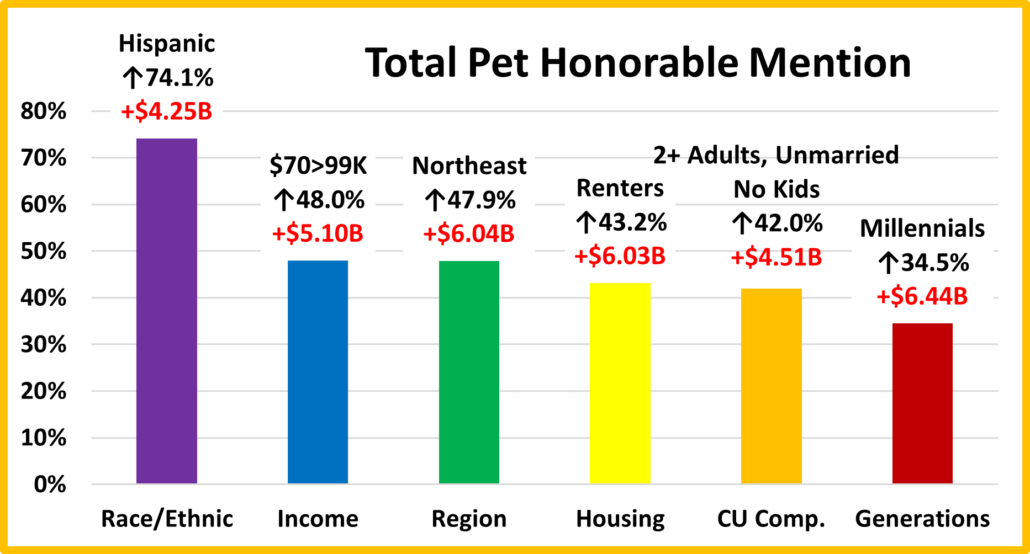 To properly review 2021, we must put it into context with recent history. Total Pet Spending reached $78.60B in 2018, a $14.28B, 22.2% increase from 2014. However, it was not a steady rise, Total spending actually fell in 2016 and each segment had at least one down year. There were a number of factors driving both the growth and tumult within the industry. Two big positives were the movement to super premium pet foods and the rapid expansion of the number of outlets offering pet services. On the downside were value shopping, trading $ between segments and outside influences like the FDA dog food warning and tariffs. Pricing, inflation/deflation was also a negative/positive factor in some cases.

In 2019, the industry had another small decrease, -$0.16B (-0.2%) which was largely driven by a huge drop in spending in Supplies caused by Tarifflation. This affected virtually every demographic segment and caused Supplies $ to fall below 2014. Services spending also fell slightly as consumers value shopped. The good news was Pet Food bounced back from the impact of the 2018 FDA warning to reach a new record high. Veterinary $ also increased 2.7%. Unfortunately, this was entirely due to a 4.1% increase in prices. The amount of Vet Services sold actually decreased.

That brings us to 2020 and the Pandemic turmoil. The effect was positive for Food and Veterinary, especially Food. Out of fear of shortages, many Pet Parents binge bought Pet Food. Spending also increased in Veterinary, as consumers focused on their Pets’ needs. The discretionary segments suffered. Supplies prices stayed high so spending continued to decline. Services saw the biggest negative pandemic impact as many outlets were subject to closures and restrictions.

2021 was a new year and brought a change in attitude as the marketplace returned to “normal”. The Food binge buying wasn’t repeated but Pet Parents caught up with all their “children’s” wants and needs. This produced a record increase in Total Pet and all segments but Food. In the best/worst performing segments, Gen X took back the top spot and  spending skewed younger and back to more traditional winners, like Homeowners w/Mtges and Incomes over $200K.

The biggest $ changes saw even more turmoil than in 2020. Only 1 segment held its position, compared to 6 in 2020, while 17 switched from 1st to last or vice versa. 7 winners flipped from last to first, but most were the “usual suspects”. There were only 2 surprise winners – No Earner, 2+CUs & Retirees, which showed that the lift wasn’t just coming from the young. On the “losing” side, 10 segments flipped from 1st to last. This was largely due to the binge buying of Food in 2020, which couldn’t be repeated in 2021. This resulted in only 3 “usual” losers – <HS Grads, African Americans and 1 Earner, Singles. At least the winning side returned to more normal behavior, but we mustn’t forget that the spending surge was widespread. 83% of all 96 demographic segments increased Pet Spending. In 2020 it was only 48%. 1 change is likely to last. The Gen Xers replaced the Boomers at the top. Millennials are in hot pursuit but that change won’t come for a number of years. We will continue our analysis of 2021 Pet $ by drilling deeper down into the individual segments.

But before we go…The Ultimate Total Pet Spending CU in 2021 has 5 people, a married couple with an oldest child 6>17. They are 35>44 yrs-old. They are White, but not Hispanic. They both work. At least one has an advanced college degree and is a Mgr/Professional. They earn $200K+. They still have a mortgage on a house located in the semi-rural West.