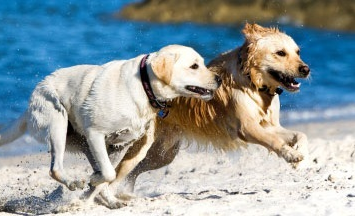 Earlier this year we updated our ongoing study of the consumer “migration” between retail channels. When we eliminate Restaurants, Auto and Gas Stations, 3 “relevant” channels stood above the “pack”. In homage to the Olympics, for their 2015 performance we “awarded” the following medals:

Unlike the Olympics, this race is run every day and effectively has no finish line. In this report we will update the standings since the end of 2015. But first, we will put these “key” channels into perspective in terms of their historical sales growth and key waypoints. As we have said on numerous occasions, the retail marketplace is constantly evolving to better fulfill the wants and needs of the consumer. These three retail channels are currently at the top but it hasn’t always been that way. Plus, who knows what changes the future will bring?

The following chart tracks $ales for these channels from 1992 to 2015. The Data in this report comes from the U.S. Census Bureau – Specifically: Their Retail Trade Reports and The Economic Census.

The 90’s – The foundation is laid for retail change.

Here’s what has happened since the end of 2015!

Supermarkets, Internet/Mailorder and SuperCenter/Clubs are the 3 largest “Pet relevant” channels in the U.S. Retail Marketplace. Just how important are they to the Pet Industry? The following chart shows their share of total retail Pet Products (Food & Supplies) sales from the last 5 Economic Census Reports. I took the liberty of including Pet Stores in this elite Pet Products Sales group. 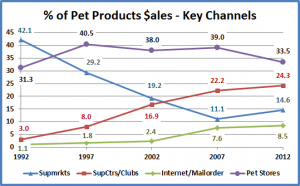 So these Retail Channels are obviously very important to the Pet Industry. What about the reverse? How important are Pet Products Sales to Supermarkets, SuperCenters/Clubs and Internet/Mailorder Retailers? In the next chart, we’ll look at the share of Pet Products Sales of the Total Revenue for each channel.

The percentages may seem low, but they represent Billions of dollars. Let’s put them into perspective. In 2015 Consumer spending on all four Pet Industry segments was about 0.94% of an average household’s total expenditures. Pet Products (Food & Supplies) spending accounted for 0.62%. In 2012 (the latest year on the chart) the numbers were 1.01% for Total Pet spending and 0.64% for Pet Products.

With these lower percentages in mind, now take a look! 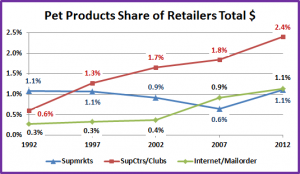 We have reviewed the history and growth of the 3 largest Relevant Retail Channels, including a month by month look at 2016 YTD. We documented Internet/Mailorder passing the SuperCenters/Clubs to firmly take over the “silver” spot in the retail marathon. We validated the importance of these channels and Supermarkets to the Pet Industry. We have also confirmed that Pet Products are important in these retailers’ current and future Plans.

Let’s take a stab at predicting the future. In a final chart, we apply the annual growth rate of Supermarkets and Internet/Mailorder since the recession to project the outcome of the race for the “Gold” that has developed.

Too conservative? Mid 2020 for Internet/Mailorder to “grab the Gold” doesn’t take into consideration that for the first time, the Internet is specifically targeting Grocery products’ revenue.

Too optimistic?  Possible restrictive changes in trade agreements could drive up prices and reduce spending on many GM products (like Pet Supplies). This would slow sales in many retail channels, even the internet.

We’ll have to wait and see…

Top 3 U.S. Retail Channels…Where did they come from?
Scroll to top