Veterinary Services is the second largest Pet Industry segment. A high inflation rate has put spending on a rollercoaster ride with today’s more price sensitive consumers. In 2015, spending was $17.11B – down -$0.47B (-2.7%) from 2014. In this report, we’ll try to determine the demographic drivers of the decrease. (Note: All numbers in this report come from or are calculated by using data from the US BLS Consumer Expenditure Surveys)

We’ll need to take a closer look. But first, the chart below gives an overview of recent Veterinary Spending. 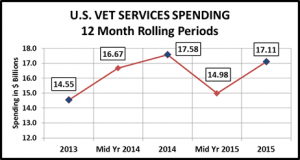 You can see the rollercoaster. The $2.1B “lift” in the second half was not enough to overcome the precipitous $2.6B drop in spending that occurred in the first half of 2015. Let’s look at spending by Income group.

Next, Veterinary Spending by Age Group 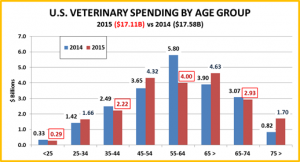 Here are some key Demographic “Movers” in Veterinary Spending. Take a look then we’ll wrap it up.

The drop in Veterinary Spending comes largely from “Middle America” – H/Hs with incomes from $50>$100K, married couples, 2 earners who work as managers or professionals, homeowners with a mortgage, living in a city or suburb . These are the some of the biggest spending demographic groups in the entire Pet industry. However, these consumers who have bought the most in the past, cut their Veterinary spending in 2015.

The single demographic segment most responsible for the overall decline in Veterinary Spending was the 55-64 age group, with a $1.8B decrease. The $5B increase in Pet Food Spending by these “Boomers” had to be a big factor in this decision to cut back. Without such a huge drop in this one segment, Veterinary sales would be up. However, you can’t ignore the fact that a continuing high inflation rate affects the spending of today’s value (price) conscious consumers across a wide spectrum of demographics.