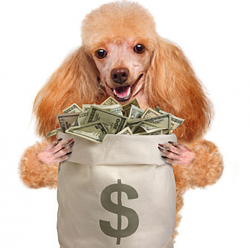 The latest Consumer Expenditure Survey conducted by the U.S. Bureau of Labor and Statistics was published in September. Pet Expenditures by the average Consumer Unit (Household) jumped from $459.70 in 2013 to $507.14 in 2014…a 10.3% increase…twice the rate of increase in total consumer expenditures, which was 4.7%.

Here’s what it looks like with details per industry segment: 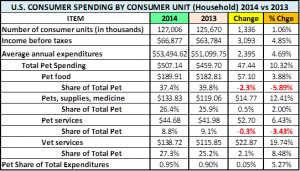 Let’s turn these “averages” into totals. It requires a special calculation because the data is gathered by 2 different methods but here’s what it looks like.

The Graph below should help you appreciate just how important the the second half of 2014 was for the Food and Supplies Segments and really the whole Industry…turning a good year into a great year! 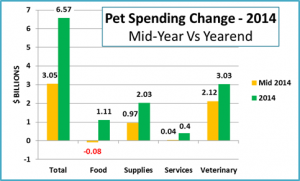 Right now I know there is still an unanswered question on everyone’s mind so let’s address it. “If the average U.S. household spends $507.14 annually on Pets, what do actual Pet Parents spend??”

If we assume that 65% of U.S. households have a pet(s), then their average annual expenditure on Pets, Pet Products and Services is $780.22.

Next, there are a lot of consumer demographics that impact Pet Spending but the one we always seem to look at first is…income. We often look at over $70K vs under $70K because that has become the midpoint in total pet spending. That is changing. To give a better view, I have divided the Consumer Units (H/H’s) into 4 income groups. U.S. consumers spent $64.3B on their Pets in 2014. Here’s who spent it: 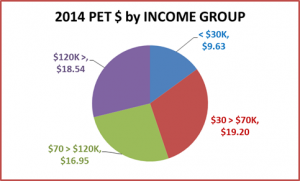 Let’s put this spending into perspective.

For each of the 4 income groups this chart shows their respective % share of: 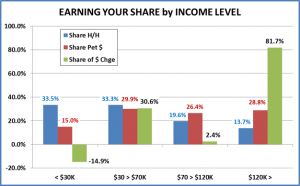 2014 was a great year for the Pet Industry. However, we have seen that it was a little greater for some households, especially those with higher incomes. Let’s now take a brief look at the Individual Segments of the industry to see what effect the consumer’s household income level has on purchases.

For our review, we will divide the Industry into 2 groups – Products, which includes Pet Food and Supplies and Services, which includes Veterinary and A/O Pet Services. The specifics of the Total U.S. performance by Segment were included in charts on the first page. We will note the totals in a recap of each section below but the primary vehicle for comparison is the “share” chart that we used for the Total Industry.

Here are the “Share” Charts for Pet Food & Pet Supplies

Here are the “share” charts for Veterinary and Pet Services

Up $6.6B! The “Headline” news for the industry is spectacularly good. However, as usual when you start looking at the details you find pluses and minuses. That’s not bad. Even the negatives are usually opportunities that, if properly handled, can generate unanticipated growth.

The Demographics of Pet Spending gives different ways to look at the market…. We looked at income. How about age, H/H composition, occupation, race/ethnic background, education, home tenure…? The USBLS has provided Pet Spending for these demographics and more. Here are a few interesting demographic “headlines” about Pet spending in the U.S. that we may address in future posts:

Let’s take another look at that last headline. It may have given us a clue to the somewhat unusual spending patterns in the $30K>$70K group…“Baby Boomers” are generally given a lot of credit for the fabulous growth of the Pet Industry…but we/they are getting old. What is happening…what will happen? Let’s look closer…

Well, that seems to make the performance of the $30K>$70K group a little clearer, but what action should be taken? Aging causes changes. Money becomes a concern and formerly easy tasks become harder…but you don’t want to give up the things that make life worthwhile…like your pets. Retailers and service providers could offer a Senior Discount…say 10% off for age 65 and older. This should be affordable and definitely make it easier for Senior Pet Parents, a fast growing demographic, to continue the benefits of having Pets.

One last bit of info….The 25>34 age group has an average income of $61K and their Pet Spending is up $1.5B!  It turns out that the Pet spending in the $30K>$70K is being driven by both ends of the Age Spectrum. It reinforces that Pets are a lifetime commitment and bodes well for the industry!

As promised, a 2 page detailed Appendix on Pet Spending by Income Group is available through the link below. Just click on the button to download and save the file as a PDF. If you would like this in Excel format, send me an e-mail request.