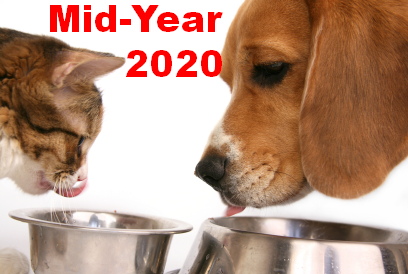 Overview of Pandemic Impact on the Survey & Data

The Pandemic has had a tremendous impact on consumers. It also impacted information gathering, including the Consumer Expenditure Survey which is managed by the US BLS and conducted by Census Bureau personnel. After March 8th nothing was done in person. In person Interviews moved online or to phone calls. Hard copy diaries were no longer collected. This process was also moved online or to phone calls where consumers read their diaries to agents over the phone. This had little impact on the interview reports. Initially there was a 5% drop in the response rate but that soon returned to normal. The Diary collection was a different story. The response rate plummeted by 50%. The US BLS immediately added additional households to the survey to make up for nonrespondents. Things improved as consumers and workers adjusted to the new normal, but the initial months were difficult. Through conscientious selection of participants, the US BLS was able to generate unbiased results. The variation for Total Spending in the 2020 report was 0.94% which is actually better than 2019’s 1.2%. That’s not to say that there were not some exceptions. Pet Food was one. The variation is within acceptable levels but is still substantially higher than 2019. We will address this in the Pet Food spending report that follows.

To put Pet Food spending into better perspective, let’s look at the impact of COVID on Consumer income & spending.

The report shows Pet Food (& Treat) Annual Spending at $37.96B, up $9.06B (+31.4%). The following charts and observations were prepared from calculations based upon data from that report and earlier ones. The first chart will help put the $37.96B into historical perspective and truly show you the roller coaster ride that is Pet Food Spending.

Historical research has shown that Pet Food spending has been on a roller coaster since 2000, with 2 years up, followed by a flat or even declining year. This up and down “ride” has been driven by a succession of Food trends. The most recent were “Natural” in 2011 and “Super Premium” in 2014. Another factor was added in 2013 – deflation. As consumers opted for higher quality, more expensive pet food, competition became more intense, with the Internet now becoming a key player. 2013 was a definitely a game changer for this segment as it began an extended period of deflation which continued through 2018. Midway through 2018, Pet Food prices were still 2.3% lower than in 2013.

The spending drops in 2013 and 2016 were driven by pet parents value shopping for their recently upgraded pet food.

As it turns out, 2014 brought out yet another new factor in Pet Food spending. For over 30 years Baby Boomers have been the leaders in the Pet Food, both in spending and in adopting new products. They still spend the most, but it turns out that the 25>34 year old Millennials led the movement to Super Premium in late 2014. The older groups, especially Boomers followed in 2015 and spending rose $5.4B. At the same time, the Pet Food spending of the 25>34 yr olds dropped. At first, we thought they had rolled back their upgrade. However, it turns out they were leading the way in another element of the trend to Super Premium – value shopping. The Boomers once again followed their lead and spending fell -$2.99B in 2016. For consumers, the Super Premium upgrade movement consisted of 3 stages:

This brought us to 2017. Time for a new “must have” trend. That didn’t happen but the competitive pricing situation brought about another change. Recent food trends have been driven by the higher income and higher education demographics. However, the “value” of Super Premium was established and now more “available”. Blue Collar workers led a new wave of spending, +$4.6B, as Super Premium more deeply penetrated the market. After the big lift in 2017, 2018 started off slowly, +$0.25B. Then came the FDA warning on grain free dog food. Many of the recent Super Premium converts immediately rolled back their upgrade and spending fell -$2.51B. This 2018 decrease broke a 20 year spending pattern. In the 1st half of 2019, Pet Food spending remained stable at the new lower level. In the second half of 2019 we started to see a recovery from the overreaction to the FDA warning and spending increased by $2.3B. Then came 2020. The recovery was continuing but a new outside influence was added which had a massive impact on U.S. consumers – the COVID-19 pandemic. In March nonessential businesses were closed. This also produced a wave of panic buying in some truly essential product categories. In the Pet Industry there is only 1 truly essential category – Pet Food. Coupled with the FDA “recovery” and the ongoing movement to Super Premium, this produced an incredible $6.76B lift in Pet Food Spending in the 1st half of 2020.

Let’s look at Pet Food spending by the 2 most popular demographic measures – age & income. The graphs are divided into larger groups than usual. This helps to mitigate any reporting anomalies. They still show both the current and previous 12 months $ as well as 2019 yearend. This will allow you to track the spending changes between halves.

The first graph is Income, which has been shown to be the single most important factor in increased Pet Spending. Here’s how you get the change for each half using the $70K+ group as an example: 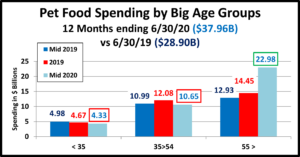 Once again, we have bundled segments into larger groups to mitigate the impact of any larger percentages of variation that may be present in smaller segments.

That gives us the “big picture” for our 2020 Mid-year update of Pet Food spending. In a “normal” year we would drill down into the performance of individual segments. However, the variations caused by the initial pandemic information gathering problems show up in individual segments, especially smaller ones. This has less impact on the total numbers but makes comparing segment performance within categories difficult.

The big lift in the 1st half of 2020 may be a little overstated but it comes as no surprise. We all saw pictures of empty shelves from consumers panic buying certain essential items. In the Pet Industry there is no more essential item than Pet Food and the current preference is for Super Premium. It isn’t called Super Premium for no reason. It costs a lot and usually comes in smaller quantities so stocking for a possible emergency can mean spending big bucks.

It also is no surprise that Boomers are behind the big lift. Their unwavering devotion to their Pet Children is what largely built today’s Pet Industry. In my research of the data, I came across an interesting correlation. The overall variation in sampling for Pet Food spending was within acceptable guidelines. The problem showed up in some individual segments.

Here are a few with exceptionally high Pet Food spending and high variation:

Based upon our past knowledge, a CU with these characteristics is basically the ultimate Pet Food spending household. These are Super Pet Parents. They are beyond conscientious regarding their pets so it would be expected that they would be the mostly likely to respond to a survey conducted under the difficult circumstances caused by the pandemic. This could give their big $ Pet Food spending a disproportionate share of the sample and significantly drive up the mean. We should also note that this big variation was in Pet Food and not widespread in their responses. The variation in Total Spending was low for these segments with a high of 3.27%. All others were below 2.5%. This means that the US BLS and Census Bureau successfully conducted a survey that was demographically representative with no overall bias. The pet food spending may be a little high, but it is extremely likely that there was a big lift in the 1st half of 2020.

We are left with the usual answer in the Pet Industry…It was the Boomers. They get the credit for the big lift and possibly the “blame” for the big variation.

Even with new techniques, the sampling response returned to a more normal level in the 2nd half of 2020. We look forward to seeing the full year data for 2020 in September.