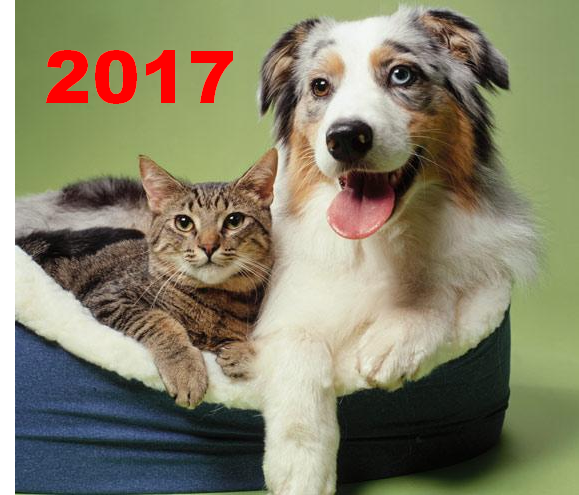 2017 continued and in fact, built on an upturn in Supplies spending which began in the second half of 2016. In this report we’ll “drill down” into the data to try to determine what and who are “behind” the huge spending lift in Supplies. 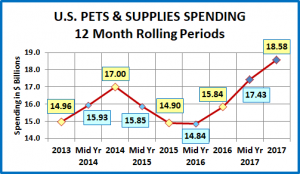 Since the great recession, you can’t talk about spending trends in the Supplies segment without talking about price – the CPI. Although many supplies are needed by Pet Parents, when they are bought and how much you spend is often discretionary. Additionally, many of the product categories in this segment are now considered commodities, so price is the main driver behind consumer purchasing behavior. When prices fall, consumers are more likely to buy more. When they go up, consumers spend less and/or buy less frequently.

In 2015 we saw how the discretionary aspect of the Supplies segment can impact spending in another way. When consumers spend a lot more $ in another segment, like for a food upgrade, they are likely to cut back on Supplies – swapping $. This is what happened in 2015. Many consumers upgraded their food, spending +$5.4B more. This gave them less to spend on other aspects of Pet Parenting. This, in conjunction with inflation, caused supplies to suffer as consumers spent 4.1% less, but they bought 10% less often. That seemingly small drop in purchase frequency (ex: Buy every 33 days instead of buying every 30 days) drove $1.6B (78%) of the $2.1B decrease in Supplies spending.

In 2016, supplies’ prices flattened out and consumers value shopped for their upgraded food. Supplies spending stabilized and began to increase in the second half. In 2017 supplies prices deflated, reaching a new post-recession low. The consumers responded with a huge $2.74B increase in Supplies spending that was widespread across demographic segments. An important factor in the lift was an increase in purchase frequency which is now within 5% of the 2014 rate.

That gives us an overview of the situation. Now let’s look at “who” was behind the big spending increase. First, we’ll look at spending by income level, the most influential demographic in Pet Spending.

In 2017 Supplies spending increased in every income segment. Here are the specifics.

Please note that while the $150K+ group had the biggest increase, the 2nd spot belonged to the lower income $30>70K.

It’s the same story as the Income demographic. Every age group spent more on Supplies in 2017. Here are the specifics.

Finally, let’s take a look some other key demographic “movers” behind the 2017 Pet Supplies Spending increase.

The big drop in spending in 2015 highlighted the vulnerability of a discretionary segment like supplies, especially through a small reduction in purchase frequency. However, the supplies segment provides many products which make the lives of pets and their “parents” easier and better, so we knew that a spending recovery was inevitable. The recovery began in the second half of 2016, as consumers “freed up” money by value shopping for their new upgraded food. Deflation in 2017 accelerated the process and spending passed the $17B level of 2014 by mid-year. By year end, spending had reached 18.58B. This was $1.58B more than 2014, $2.74B more than 2016 and $3.74B more than the spending low point in mid-2016. Purchase size was up significantly and spending frequency was 95% of 2014 – a more normal market.

If you would like more proof of “normalcy”, just look at the winners in the chart above. College Grads, Managers, Homeowners w/Mtge, $150K+ income and small Suburbs are all the “usual suspects” behind a lift in Supplies spending. However, the 2017 spending lift was almost universal. All income and age groups spent more and in fact, 89 of 94 demographic segments (94.6%) bought more supplies.

The $2.74B increase in Supplies spending was obviously great news, especially following the $0.94B increase in 2016. This gives the Supplies segment an average annual increase rate of 3% since 2014, which is not great, but is a return to more normal levels. How it happened does cause some concern as supplies prices deflated 0.4% in 2017. This may not sound like much but it did push them down to the level of 2007 and to a record 5.3% below their all-time high in 2009.

Deflation increases profit pressure on retailers and especially manufacturers. In Supplies, it appears that the only way to increase spending is to reduce prices. What happens if they go up? We’ll soon find out as prices rose sharply in the second quarter of 2018. In June of 2018 they were 1.85% higher than in December of 2017.